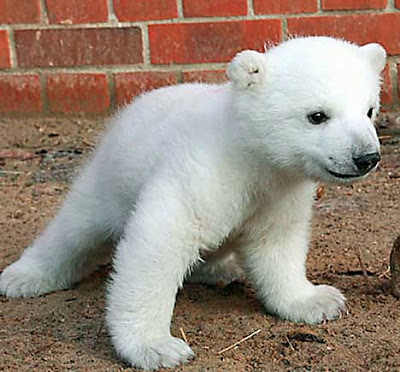 Knut of Berlin, born on December 5th, like any cute bear ;-), no longer looks innocent and you don't want to meet him on the street.

Bob Ferguson sent me links to a new SPPI article by Joanne Nova:

He was going to attend the 2009 meeting of the Polar Bear Specialist Group (PBSG). The name sounds technical, doesn't it? Unfortunately, in one of his papers, he wrote this somewhat self-evident, yet detailed, balanced, and carefully worded description of the polar bears' situation:

“The concern that polar bears will decline if the climate continues to warm is valid. However, the assertion that polar bears will become extinct unless immediate measures are taken to curb greenhouse gas emissions is irrational because it is inconsistent with the long-term persistence of polar bears through previous periods of warming and cooling; and because the IPCC climate model predictions 50 and 100 years into the future do not suggest a future with insufficient sea ice to support polar bears as a viable species.”

What was the answer? He wasn't allowed to participate. Here is Mr Andrew Derocher's letter:

The world is a political place and for polar bears, more so now than ever before. I have no problem with dissenting views as long as they are supportable by logic, scientific reasoning, and the literature.

I do believe, as do many PBSG members, that for the sake of polar bear conservation, views that run counter to human induced climate change are extremely unhelpful. In this vein, your positions and statements in the Manhattan Declaration, the Frontier Institute, and the Science and Public Policy Institute are inconsistent with positions taken by the PBSG.


I too was not surprised by the members not endorsing an invitation. Nothing I heard had to do with your science on harvesting or your research on polar bears - it was the positions you've taken on global warming that brought opposition.

Time will tell who is correct but the scientific literature is not on the side of those arguing against human induced climate change. I look forward to having someone else chair the PBSG.

Wow. It's amazing how he's not even trying to hide anything. He's apparently proud that he's harassing a top member of his group for political reasons.

The world may be a political place but a scientific institution is simply not allowed to become a political place. That's exactly what PBSG has become. Let me waste no more time with this scumbag and simply urge all decent people in the world to spit on this Derocher garbage whenever they meet it on the street.

Polar bears are extremely unlikely to go extinct. But imagine, just for the sake of an argument, that the Arctic is going to warm up sufficiently for them to get drowned. Can we save them?

There are 20,000-25,000 polar bears in the world. Each of them can get a modern, air-conditioned boat with GPS and other useful gadgets. Such a vehicle may save them whenever they need it. It may be programmed to follow the bear, so that he never gets lost. Or you may invent better algorithms. Imagine that Mercedes wins the contract. Their price is USD 10,000 per boat.

A simple calculation reveals that it's about USD 250 million to save polar bears. I can give you analogous stories with analogous numbers, describing the price of "subsidized" meat that they may require every year. After all, it may be a good idea to feed them so that they don't kill so many precious baby seals. You know, if the civilization wants to save the polar bears, it's a pretty cheap task. The details of my project to do so are not yet optimal - it's a fast idea - but the conclusion that it would be relatively cheap is robust.

The point is that the polar bears are being used as an argument to pay tens of trillions of dollars in the decades to come. That's about 100,000 (one-hundred-thousand) times bigger an amount of money! You don't have to be cooling down a whole planet (moreover, using a very inefficient, CO2 greenhouse effect) in order to protect a few thousand animals from drowning or temporary hunger.