On November 14th, 1856, the last brown bear was shot in the Bohemian Forest. This padded female individual became one of the exponates of the beautiful "Hluboká upon Moldau" Chateau.

In the 1990s, some Czech pundits were proposing to return the bear to the Czech hills. 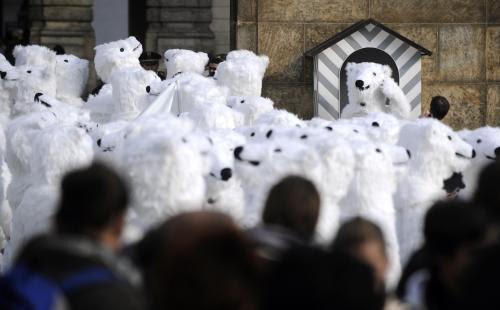 However, an unexpected twist occurred today. Sixty-five of their cousins - who believe that their white skin makes them superior - overrun the Prague Castle:

Their main slogan was a variation of the Stalinist dictum from the 1950s that used to be directed against the imperialists, "We won't allow our republic to be subverted" ("Republiku si rozvracet nedáme").

The polar bears' new slogan is

Some people thought - and you might think - that the polar bears came there to protest the fact that the Czech president is a climate realist. But the organizers reject this hypothesis:

This is a misunderstanding. These polar bears legally arrived here from Greenland to support the Czech president.

This answer seems to agree with some of the banners. The polar bears urged Václav Klaus "to keep on campaigning against the myth of global warming." That much for the assumption that polar bears must automatically be alarmists. :-)

Some of the bears also demanded to become JUDr, i.e. to acquire the degrees for doctors of law. Around 11 am, the bears placed a wreath with ribbons at the Hradčany Square, saying "Bears for the People", and they urged the people to sign a petition to support Václav Klaus. 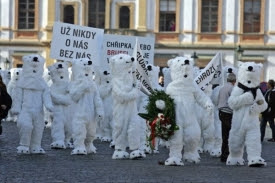 However, the organizers claim that it was just a happening, not an event to promote a product. :-)

Well, there are clearly way too many bears in Czechia and the hunters should go after their neck once again. And the people who send these bears to trips at the Prague Castle have way too much money in their pockets. :-)

The presence of this rather sophisticated Czech humor at the rally makes me uncertain about the question whether the organizers are actually environmentalists: while it's the most obvious explanation, I have some doubts about it. For example, several friends of mine have a neutral opinion about the climate matters but they would be eager to organize a similar happening.

The Czech Constitutional Court will publicly negotiate about the complaint against the Treaty of Lisbon tomorrow.

Hungary has announced that they will oppose the Czech and Slovak demands for an exemption from the Bill of Rights. While the Swedish EU presidency has agreed that Klaus's conditions are legitimate, harmless, and worth their support, our Southeastern friends prefer to kill the Treaty of Lisbon over losing the chance to revert some of the results of the World War II.

So while the motivation of the Hungarian minister are predominantly the old anti-Czechoslovak sentiments inhereted from the Horthy era, Peter Balazs is actually becoming an odd ally of Klaus in the efforts to kill the treaty, as a WSJ blog points out.

I have already claimed, and I think that the newest events offer some evidence for the statement, that this revelation of the genuine deep divisions within the EU has been the very plan of President Klaus in his attempts to stop the Lisbon train.

Meanwhile, Angela Merkel has chosen the name of the new commissioner to replace Günther Verheugen as the German EU commissioner.

Well, only the surname was changed: it's Günther Oettinger. But this local politician is famous for a nice eulogy praising a former Nazi judge.

If Oettinger gets Verheugen's previous job, i.e. the commissioner for the EU expansion, the new commission seat could be renamed to the "Drang nach Osten ministry". :-)
Luboš Motl v 3:02 PM
Share