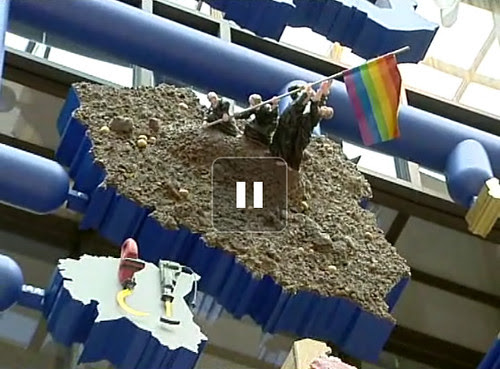 The main reason why the talks in Copenhagen won't lead to any outcome is not the ability of politicians to see that the science behind these projects is weak. Instead, it is a disagreement - mainly between the poor and rich countries - about the question who should pay for the programs to reduce the mankind's CO2 footprint.


The poor countries want something close to a trillion of dollars to be paid to them every year. The European Union is supposed to be counted as one of the main rich donors.


The Polish finance minister claims that poorer EU countries such as Poland simply can't participate in EU plans to redistribute wealth to poor countries outside the EU.

Now, you should look at the


For example, according to the tables,
You see that Poland's GDP per capita is about 1/2 of the major Western European economies' figures. Well, it's still 3 times higher than China, near $6,000 a year, and 6 times higher than India, roughly $3,000 a year. There are many differences and nations fall into "many groups", so to say.

Most TRF readers agree that it is profoundly irrational to regulate carbon dioxide because the costs of such regulations exceed the benefits by several orders of magnitude. Moreover, even the sign doesn't work because when all profits and losses are added, a higher CO2 level is probably beneficial, anyway, so it is a lose-lose situation to regulate it.

But imagine, just for the sake of an argument, that CO2 is damaging to the world, its ecosystems, and the economies. What would be the fair way for different nations to compensate the world for their CO2 emissions? Well, I think that the answer would be obvious. If CO2 were damaging, then it could be said - at least in principle - that one ton of CO2 emitted anywhere creates X dollars of losses to the world. A carbon tax of X dollars should be added to any activity that creates one ton of CO2.

Now, no one will tell you how much X actually is. One of the reasons is that X is actually negative, but that's one of the inconvenient truths.

The cap-and-trade system is composed out of two segments: the "trade" is completely legitimate, a part of the market economy. Such trading makes the economy adapt to the external conditions: it uses the invisible hand and it works. On the other hand, the "cap" part is a completely illegitimate, totalitarian restriction of the human freedom. No one can "calculate" how big the cap should be: it's because it should really be infinite. There should be no cap.

Fine. But the only difference between a carbon tax and a cap-and-trade system is that in the case of a carbon tax, we know (and say) in advance how much the subjects will pay for one ton of CO2: it's X dollars per ton. We don't know how much it will help to cool the Earth (which is a good thing, by the assumption that I have to repeat because it's so unusual), and we surely don't know what the temperature of the Earth will exactly be. ;-) In the cap-and-trade system, we don't know how much X is. But we define a "plan" in advance that the final volume of CO2 emissions - or even the final temperature at some time - should be "T".

I have already explained that the "carbon tax" is analogous to a grandcanonical ensemble, and is preferred by the libertarian and conservatives (because the rules and payments are fixed, and the society can evolve wherever it wants, given the external conditions), while the "cap-and-trade" system is analogous to the microcanonical ensemble, and is preferred by the leftists (because they start with their ideal world, and everyone is obliged to do whatever is needed to fulfill the plan).

It has been observed that the cap-and-trade system leads to brutal fluctuations of the price of one ton of CO2 indulgences - sometimes by several orders of magnitude (from tens of euros to a few eurocents). This system doesn't really work. But imagine that some politicians are impartial and bright enough so that they can calculate the right cap at each moment so that the price fluctuations are suppressed.

When they do so, the result will be indistinguishable from a carbon tax with some appropriate value of "X" for the carbon tax per one ton of CO2.

Except for one additional key "subtlety". The subtlety is that in the cap-and-trade system, it is generally understood that various companies and individuals receive a certain amount of CO2 permits that they don't have to buy. (In the version of the "cap-and-trade" system that would be equivalent to a carbon tax with a certain "X", everyone would have to buy the permits for every ton he emits, none of them would be for free, and the "world government" - the only primary seller - would simply know how many permits it wants to print in total.)

But in the case of the real "cap-and-trade" system where a certain amount of permits is obtained for free, this amount of permits that particular nations, companies, and individuals receive can be determined in an arbitrary way so that the "caps" are really a powerful method to redistribute wealth from anywhere to anywhere, depending on the tastes of whoever gets the power to decide about the caps.

So individual industries may get exceptions (a lot of room for lobbying and corruption!), and a huge number of carbon indulgences for free. Poor countries can get a lot of permits because they're poor - and their economies won't be restricted at all.

Some economies can get a lot of permits just because they happened to reduce a lot of heavy industry after 1990. For example, because of the bizarre rules of the Kyoto protocol whose calculation of the "permits given to nations for free" was based on the year 1990, Czechia has so many indulgences left that it could recently sell 20 million carbon credits to the Japanese E.T. who needs them pretty badly, despite hosing the city of Kyoto where this whole nonsense was masterminded. ;-)

You can see that none of these transfers of money has anything to do with the actual reduction of CO2 emissions. All of them are results of ad hoc political rules and treaties, lobbying, corruption, the ideology of the people who appear somewhere at the right moment, and their mood swings. Clearly, the left-wing groups want to use this carbon theme as a tool for wealth redistribution. But if someone else gets to the steering wheels, he can redistribute trillions of dollars according to different plans. Can the world be stupid enough to be fooled in this way?

So I think that if the world were thinking that CO2 is bad, a carbon tax should simply be added to every ton of CO2 that is emitted, regardless of the place, nationality, type of industry, GDP, or the emissions in the past by the nation, company, or person who is making these emissions. Every year, the carbon tax ("X" dollars per ton) could be changed, and it should ultimately be eliminated once people realize that it is a completely misguided idea to try to reduce CO2 emissions. (Before it's eliminated, people could accept e.g. Ross McKitrick's CO2 tax whose magnitude is determined by the rate of the warming in the tropical troposphere where the greenhouse effect should be "most visible": in recent years, the tax would actually be negative, supporting you to emit haha.)

But the caps and decisions about the "fair" redistribution of permits that are a priori allowed to individual nations, companies, and citizens simply cannot lead to any agreement. Any deviation from the "null regulations" where every ton of CO2 costs the same thing is equivalent to a transfer of hundreds of billions or a few trillions of dollars from one place to another - a transfer that wouldn't occur otherwise. Such things simply can't be expected to be agreed upon peacefully.

Nations have started wars because of smaller amounts of money than trillions of dollars.
Luboš Motl v 6:42 PM
Share