Sean Carroll has brought our attention to an astro-ph preprint by Rachel Bean, 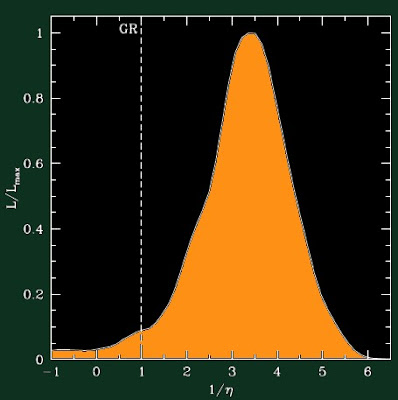 She calculates some chi-square distributions and decides that the fit is significantly improved if she allows the parameter "eta" - a ratio between "two kinds of the gravitational potential" which should be equal to 1 according to GR - to be adjustable, ideally to 3.5 or so. Such an improvement of the fit by the adjustment of "eta" to a wrong value shouldn't occur by chance. Quantitatively, she thinks that GR fails at the 98% confidence level.

The whole effect comes from some correlations in places where the redshift "z" is greater than one. Recall that "z=0" corresponds to the present era. The whole improvement comes from the COSMOS weak-lensing data.


You know, Rachel Bean - a fresh NSF early career award winner - is a serious researcher: at any rate, I think that you won't be able to see the problems with the paper - even though they probably exist - immediately. You know, we are not talking about Mr Bean: she is actually Ms Bean which improves the odds in this particular case. :-)

It remains to be seen whether the effect is evidence supporting some new fundamental physics (related to an exotic interpretation of the dark energy data or holography at the cosmological scale) or something less spectacular.

Well, there are many reasons to think that the reason is something in the latter category. A reader at the Cosmic Variance, Malo Juevo, thinks that there is something strange or unusual with her statistics.

I can't confirm it: what is happening with the chi-squared in the preprint is approximately what you expect in a process of falsifying a simple hypothesis. Sociologically speaking, I would really bet that she knows statistics well. If there is a problem, my guess is an incorrect calculation of chi-squared, perhaps by an incorrect assumption of independence of the individual terms.

Another reader, weak-lensing expert Alexie Leauthaud, points out that some of their data used in the paper have been modified since 2007, especially in the relevant larger "z" region. That is likely to influence the tempography calculations because the weak-lensing data are critical for Bean's "effect".

Additionally, some other datasets may have been changed, too. Also, her theoretical calculation of the predictions of GR may be "oversimplified", if not downright incorrect: it may neglect a key effect. And finally, one can say that 98% is far from a certainty. If you ask 50 cosmologists to write such a paper with a 98% falsification of GR based on different types of correlations, one of them is expected to succeed by chance. ;-)

At any rate, I am curious about the guesses of the readers, especially the more detailed ones.
Luboš Motl v 7:21 PM
Share