I think that the most interesting - and visually attractive - hep-th paper today is the last one, 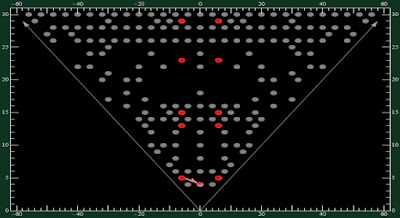 If you look at the picture above - disks indicate known Calabi-Yau three-folds, organized according to the difference (x) and the sum (y) of their nontrivial Hodge numbers (h11,h12), and you're asked where we should be living, the anthropic people will send their hands to the top, or (infinitely?) above it - to the "generic" Calabi-Yau manifolds with large topological invariants.

However, most of the sane people - much like the droplets of beer pouring along the conical glass - will choose the region near the tip of the cone at the bottom which surely looks special: the "simplest" Calabi-Yau shapes, in some natural sense of the adjectives, are located there. The red dots represent Calabi-Yaus with the Euler character chi equal to +6 or -6, leading to 3 generations (for the E8 x E8 heterotic string, via the standard embedding of the spin connection to gauge connection).


Incidentally, the left-right symmetry in this picture is the mirror symmetry, and the authors are able to use the old math-loaded Batyrev techniques whose existence is known even to the readers of The Elegant Universe (and whose actual methodology is largely unknown even to your humble correspondent) to construct the mirrors.

The resulting "Y/G" has the same Hodge numbers for both inequivalent choices of "G". And they can also find singular points in their moduli spaces that exhibit three conifold singularities distributed along the manifold. When they're resolved at the same moment, you end up with a Calabi-Yau with "(h11,h12) = (2,2)" and a vanishing Euler character, the very bottom of the cone!

The toric geometry plays a big role in the paper, and the pretty pair of intertwined prisms above appears because the construction hides the "dP_6" del Pezzo surface which is known to be toric. But many other polyhedra had to be drawn, too. 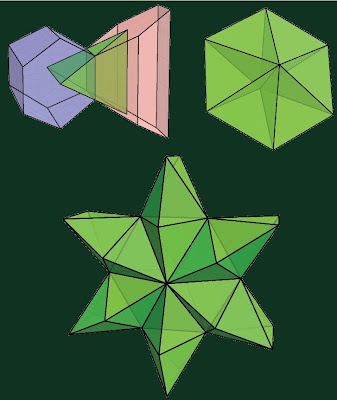 Believe me or not, the animals above are among them. ;-) All this stuff is not only visually appealing but also very serious and our world could actually be the heterotic compactification on this particular manifold - one transition away from the ultimate "simplest" Calabi-Yau. But I am afraid that most of the people won't be interested in it unless Volker Braun et al. improve their surfing and snowboarding skills. ;-)
Luboš Motl v 9:45 AM
Share