The expenses for cleaning Moscow from snow are equal to tens of millions of dollars a year. 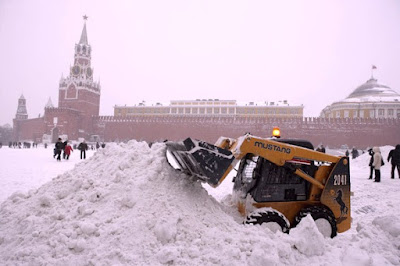 Imagine that you're the mayor of Moscow and you're told that it costs 6 million dollars to "seed" all snow clouds during the winter, so that they drop their loads outside the city. The biggest clouds will be targeted by the air defense system.


Yes, (a) is correct. You will extend the communist slogan, "We will command wind and rain", and approve the measure. That's what Yury Luzhkov, the mayor, just did. See:

Similar measures have been used to guarantee "good weather on the Red Square" for various Soviet holidays: it really works. ;-) So why wouldn't they use it for other purposes during capitalism, too?

Note that the Russian officials have learned how to behave economically. In most of the former capitalist countries, the politicians would organize multi-trillion nation-wide or global pogroms to heat the whole planet up by 10 degrees. ;-)
Luboš Motl v 1:01 PM
Share