The Pew Research Center for the People & the Press has published their newest numbers documenting the changing opinions about global warming in the U.S.

Is there solid evidence that the Earth is warming [at all]?

Is there solid evidence that the Earth is warming because of human activity?

In 2008, the "Yes" score was at 47%, i.e. almost one half agreed with the basic AGW statement. In 2009, the number dropped to 36%, i.e. by 11 percentage points. About one third of Americans believe in man-made global warming today - which makes this religion less popular than creationism. ;-)

If we extrapolate this trend, the number of AGW believers in the U.S. will become negative in five years. ;-)

The belief in "solid scientific evidence supporting global warming, whatever is the cause," has been going down since 2006 among the voters of all parties. The 2007 Republican score that slightly exceeded the 2006 score was a mild exception. 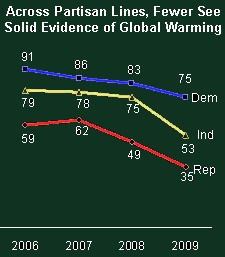 You see that among the independents, the rate of depletion of the AGW believers accelerated by a factor of ten.

This statement is much bolder than the previous ones so it's not surprising that the percentages are correspondingly lower.

Yes, less than one fifth of the Republican fans think that there is solid scientific evidence supporting man-made global warming. The Democrats are evenly split.

Among those who have heard nothing about the cap-and-trade, the policy is:

It looks good for cap-and-trade, doesn't it? It gets slightly better among those who have heard a "little":

However, there are also people who have heard a lot about the cap-and-trade, and they offer a substantially different perspective:

As you can see, only the ignorant, briefly brainwashed left-wing people support the AGW orthodoxy and its plans for new kinds of regulation.

However, the Europeans give significantly greener answers than the Americans, the Harris Poll has shown.
Luboš Motl v 5:06 PM
Share