Why the Treaty of Lisbon is considered unconstitutional 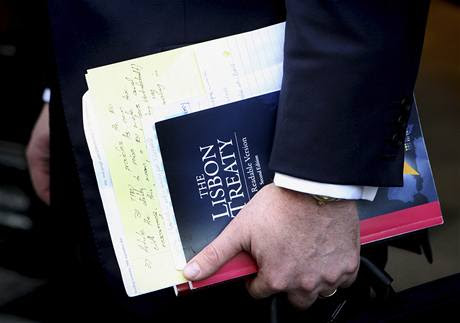 The 17 Senators led by Mr Jiří Oberfalzer (conservative ODS) have submitted their new complaint against the Treaty of Lisbon to the Czech Constitutional Court in Brno. The chairman of the Constitutional Court immediately informed President Klaus that he is not allowed to sign the treaty until the court releases the verdict (which may be as early as in 4-6 weeks).

On those 44 pages, they explain that they consider the document unconstitutional because of many reasons. Most of the reasons should be understandable in all the EU countries; a few of them may be specific to the Czech legal system.

First, there is a problem with the format. The Treaty of Lisbon is recycling the legal material from the previous treaties. It is therefore extremely incomprehensible and it doesn't provide an easy survey. Moreover, although it substantially changes 90 percent of the rules listed in the previous treaty and, consequently, the arrangement of the EU, it is formally an amendment. According to the Senators, such a format is incompatible with the rule of law. It's because the Constitutional Court has previously banned the so-called "glued amendments" ("přílepky"). The Lisbon format is even worse than a glued addition, they argue.

Second, the Treaty of Lisbon is not politically neutral because among the goals of the EU, it enumerates many policies that belong to the political programs of some political parties rather than the basic laws of the EU. This fact makes it incompatible with the democratic rule of law because the treaty restricts the questions whose fate should be decided by the elections.


Third, the Senators object that it is expected that the treaty may be modified a posteriori, which is confirmed even by the currently available text. It follows that the leaders were not signing a treaty but a mere half-finished product that is being modified as time goes by. This aspect contradicts the rule of law, too.

Fourth, the paragraph of the treaty claiming that the EU is based on parliamentary democracy is unconstitutional, too. According to the Senators, the EU must be based on equal rights of the member states instead. The European Parliament is just an addition to the existing system of institutions in the EU countries. If it were the fundamental pillar, the EU would be a country.

Sixth, the treaty restricts the co-operation between certain members of the Union (that goes beyond the co-operation within the EU) by the required agreement of the EU which is a typical feature of a federation.

Seventh, the common defense required by the treaty contradicts the sovereignty of the member states. The Czech Republic is not constitutionally allowed to transfer vital competences that are needed for the existence and preservation of the country to other subjects. The defense is the best example. Moreover, the common defense would be incompatible with the existence of NATO. Additional competences that have to remain in Czechia are listed at the bottom.

Eighth, the treaty limits the possibility to leave the Union. It's not true that it's the treaty that introduces such a possibility because the possibility already exists today, Senators argue. On the contrary, the new treaty says that quitting requires the agreement within the EU and a two-year probation period. In practice, it means that the EU is allowed to demand conditions that can't be fulfilled.

Nineth, the Senators are concerned with the issue of immigration. They see a disagreement between the Czech constitution and a regulation in the treaty saying that "when one or several member states get into an emergency situation because of a sudden inflow of citizens from a third country, the Council has the right to adopt special temporary policies that help the affected countries, following a proposal by the Commission".

The Treaty of Lisbon also says that the "Union is pursuing a shared immigration policy whose goal is to effectively direct immigration flows at all stages". The right to decide about the composition of the population belongs among the basic rights of every country. The Czech Republic therefore doesn't have the right to transfer the rights to control the migration flows through or to its territory to another subject.

Tenth, the Senators question the guarantees for Ireland. They were adopted in the contradiction with our constitution, and are therefore invalid. Much like the Treaty of Lisbon itself, they should have been ratified as a constitutional law, with the required extended majorities, because it is a genuine amendment of the Treaty of Lisbon i.e. another international treaty. Without such a special ratification, the guarantees are just a non-binding pledge.

According to the Senators, especially the following competences, among others, cannot be transfered: