Al Gore: the interior of the Earth is extremely hot, several million degrees

That's because you haven't heard Al Gore's opinions about the temperature of the Earth's core.

He's told by the host that the geothermal energy looks like a plan to defeat Superman. Gore's defense of this ludicrous source of energy is striking.

He says that two kilometers under the surface, there are incredibly hot rocks because the interior of the Earth is extre-hehehe-mely hot: several million degrees.

And the crust is therefore hot, too. So they have just invented drills that don't melt in these several million degrees, Gore tells us. ;-)

What a breathtaking simpleton. It's very clear that he can't possibly have the slightest clue about physics, geology, and energy flows on the Earth. It's sad that many politicians lack the basic science education.


Just to be sure, the center of the Earth has roughly 7000 °C - the temperature gets warmer by 1 °C per kilometer of depth - and no conventional material can stay solid (or even liquid or an ordinary gas) above a few thousand degrees Celsius. 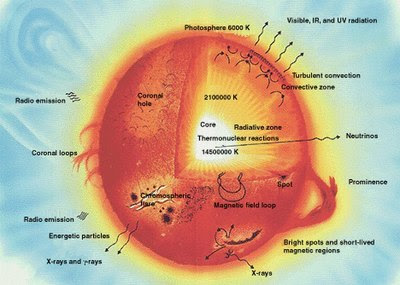 The temperature in the middle of the Sun is around 14 million Celsius degrees. But you know, the Sun is a bit different from the Earth. It is a star and thermonuclear reactions running over there guarantee that it is shining a lot of its own light, unlike the Earth. Believe me, Al: you don't want to build your new house from your green fraudulent money 4,000 miles from something that resembles the Sun's core. ;-)

I also wonder how he can possibly sustain so stunningly incompatible beliefs in his otherwise hollow skull: if the interior of the Earth were several million degrees hot, the average gradient would be around 1 degree per meter of depth. A few additional meters of a rock could therefore screen you from the "cataclysmic" warming.

It just makes no sense. On one hand, he wants others to believe - and maybe believes himself (?) - that two or three degrees Celsius of warming would be a life-killing catastrophe. On the other hand, he believes that the temperature inside the Earth changes by millions of degrees, depending on the location.

Don't get me wrong, I am no foe of geothermal energy. But it currently produces about 0.3% of the global energy demand. Only near the tectonic plate boundaries, the installation is relatively doable today. That's why geothermal power plants may thrive in Iceland but not in the bulk of Europe or America.

There's surely some room for expansion of this source of energy but it doesn't seem realistic to expect that geothermal energy will replace the fossil fuels in the bulk of their current applications.

If you want to have a sensible idea about the amount of geothermal energy we can get by sensible tools, it's excellent to imagine the "hot water bubbling up at some places" (usually in combination with lots of fart-y gases such as methane, ammonia, and hydrogen sulfide, besides innocent carbon dioxide) - exactly the right idea that Al Gore doesn't like because it cools the irrational hype (or downright lies) surrounding the alternative sources of energy.