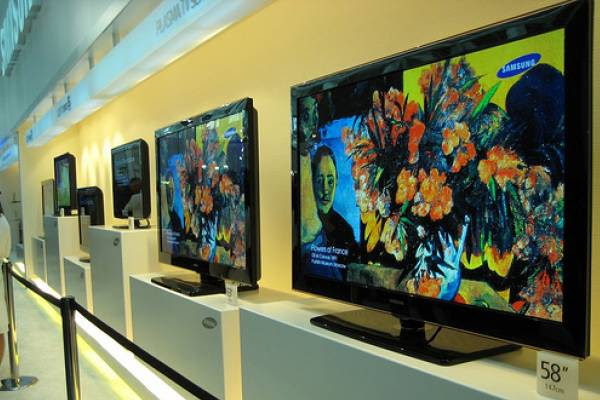 The Toronto Star, The Tech Herald, and most other media (including the Czech ones) have informed us that the green police in California has focused on flat TVs.

Well, you wouldn't expect such a ban in California - the state that is most heavily overrepresented in its contributions to the global film and TV industry. But don't forget that the Hollywood Left and de-facto Left has a lot green activist types in it and one of them has become the governor, too.

Big plasma and LCD screens have to consume at most 2/3 of the current average electricity consumption of the same-size TVs by 2011 - less than 183 Watts for the most typical 42-inch (107-centimeter) screens -, otherwise they will be banned in the shops. Since 2013, devices will have to sit at 1/2 of the current consumption - below 113 Watts in the case of 42-inch screens. Note that plasma TVs typically consume roughly twice as much power as the LCD screens of the same size.

Well, look at Froogle (Google Products). What kind of plasma TVs does it offer? Well, the first 42-inch plasma screen in the list is Panasonic TC - P42S1, FullHD, for $745. The operational power consumption is 485 Watts which is 2.5 times the limit. Just to have a clue about the realistic numbers. ;-)

But I am not sure whether you will find any screens on the market today that would pass the 2013 limit. Will they be constructed at all? At the end, the restriction may mean a complete ban of all plasma TVs. You know, there exists a certain physical limit how much the power can drop. A bright, sharp, large enough image simply requires a certain power and a wishful thinking can't beat the laws of physics. Moreover, getting close to this physical limit may be pretty expensive.

Much like in the case of the light bulbs in the EU (which lose 22% of their luminosity during their lifetime in average, as BBC and others reported today), I have nothing whatsoever against the power-efficient models in general. But I can have something against them in particular contexts. Their disadvantages in special situations are enough for any universal restriction to be highly counterproductive.

Even if all TVs became 33% more efficient than today, California's power consumption would drop by 0.7% only because the total power consumption of all TVs only makes about 2% of California's electricity consumption. Are those 0.7% really worth the terror? And in reality, only a tiny fraction of the TVs will be affected (and many people will continue to use their old TVs, anyway), so the true magnitude of the savings is guaranteed to be orders of magnitude below those 0.7%.

Note that the average U.S. price of electricity was 12 cents per kWh in April 2009.

If you buy a new TV that consumes 100 W less than your previous one, you will therefore save 1.2 cents per hour. If you watch TV for two hours a day in average, you will save 9 TV dollars a year for your electricity bill. You will need to accumulate these savings for your whole life if you want to pay for a 113-Watt TV that was more expensive e.g. by 700 dollars, and be sure that the 113-Watts big TVs may be even more expensive than that. And by the way, a significant portion of the extra expenses needed to make an energy-efficient device may be spent for energy during production ;-), so that the overall savings - even when you only care about energy - may be much smaller if not negative.

Whether this comment is relevant or not, one thing looks obvious to me. Because the savings seem to be symbolic in nature, I would say that the purpose of the restriction may be interpreted as an exercise designed to prepare the people for the future totalitarian society where all human activities are controlled by the government.

Schwarzenegger's California is getting qualitatively similar to another C*a country, namely Hu Jintao's China that just banned the Microsoft Windows sales because of some doubts about a font contract. However, Microsoft doesn't expect its sales to be affected. ;-)
Luboš Motl v 11:57 AM
Share