According to the newest

the El Niño conditions are getting stronger and will almost certainly become a new El Niño episode once the November 2009 data are accounted for. 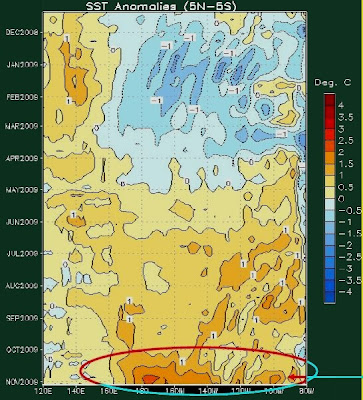 Click to zoom in. Apologies for the yellow line.

The chart above shows the Pacific equatorial (between 5°N and 5°S) sea surface temperature anomalies; the axes are longitude and time. You see that they switched from cool (blue, negative) values to warm (orange, positive) values during April 2009.

Recall that from April 2007 through June 2008, we experienced a La Niña episode. At the end of 2008, it seemed like a new La Niña episode was getting started.

By the way, if the +1.7 °C reading stays (or is surpassed) in the following 3-month period, the index will jump to values unseen since the 1997-1998 "El Niño of the century". Such El Niño episodes are also likely to increase the global mean temperature. With such a powerful El Niño, it is conceivable that 2010 may end up being warmer than 1998 and/or 2005.

You may notice that the ENSO indices in JJA, JAS, and ASO 2009 have been identical to those in JJA, JAS, and ASO 2004, five years earlier. So if all other things were equal, it would be reasonable to expect that 2010 (which will be affected by the 2009-2010 El Niño whose effects appear after an approximate 6-month delay) could be exactly as warm as 2005. Of course, the comparison can fall to either side, with the 50:50 odds.

Incidentally, be sure that 2009 can no longer set the new warmth record, regardless of your preferred source of the global mean temperature data. Gaia would need temperatures warmer by something like 0.5 °C than today to last from tomorrow till the end of the year (in average) which is unlikely. According to the satellites, it will be the 11th year that will have failed to improve the record reading. However, 2009 will be warmer than 2008 and probably other recent cooler years.
Luboš Motl v 8:16 PM
Share