The Fermi telescope, formerly known as GLAST, is on the roll.

After having proven that the proponents of all Lorentz-violating theories are cranks, after having told astrophysicists a lot of details about the gamma ray bursts (GRBs), and after having provided us with some new hints that new physics could be behind the WMAP haze, this relatively cheap $0.69 billion experiment is going to question our ideas about the phenomena that are seemingly as mundane as the lightnings. I really mean ordinary thunderstorms.

Many of us like to think of thunderstorms as electric phenomena whose properties can be captured by non-relativistic quantum mechanics. Well, it is just the electrons that move frantically in a thunderstorm, right? But the speed should be much smaller than the speed of light and non-relativistic quantum mechanics should be enough, your humble correspondent would have told you an hour ago.

Lightnings can be dramatic, like this 2007 event in Oklahoma, but we still think that they're "nonrelativistic" events.

After all, the existing standard texts say that the temperatures in the lightning reach at most 30,000 Kelvin which looks like a pretty high temperature but it translates to 2.6 electronvolts (divided by Boltzmann's constant). That's much less than 511 keV, the rest latent energy of an electron.


On the other hand, the temperature needed to create electron-positron pairs is something like 6 billion Kelvins. You could expect that it is way too high a temperature, the ordinary thunderstorms can't get anywhere close to it, and the number of produced positrons must therefore be negligible and unmeasurable.

However, Fermi has looked at the Universe during terrestrial thunderstorms, too. And it has found positrons - the electrons' antiparticles - during these storms on the Earth. There is antimatter over there! The results were announced by Michael Briggs of UAH, Alabama at the Fermi symposium three days ago.

The statement is supported simply by 511 keV photons observer by the telescope. They come from annihilating electron-positron pairs. 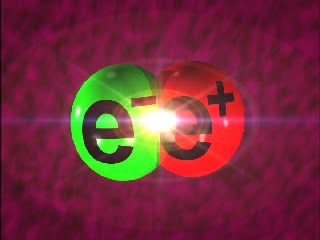 Moreover, it seems that the positrons have not been observed previously, despite efforts to look there. An explanation could be pretty dramatic: a property of the electric fields driving the thunderstorms could have been reversed!

If thunderstorms create antiparticles under certain conditions but not other conditions, these conditions may have a substantial impact on the weather. There are clearly many natural phenomena in the atmosphere that are waiting to be discovered, understood, and appreciated.

By the way, Werdna as well as Anthony Watts suggest that the lightnings seem to be "natural linear accelerator" - Nature's own SLAC, if you wish.

However, I have doubts that the atmosphere is empty enough - that the air is good enough "vacuum" - to allow particles to be accelerated that much. Moreover, I guess that they're probably seeing much sharper 511 keV lines than what would be predicted from generic high-energy accelerated chaos. So I prefer to believe that some positrons always live somewhere in the atmosphere and they are just being more effectively attracted, collected, focused, accelerated, and/or annihilated during thunderstorms.

PAMELA has brought us some evidence of positrons in the ionosphere so that may be their origin. Be sure, I agree with you that positrons can't survive in the lower atmosphere.

Of course, the electrons could also hypothetically arise from some nuclear reactions (beta decay) "catalyzed" by the lightning. At any rate, I am unable to tell you the full story right now. However, it's conceivable that the full story behind these observations will become clear within months.