Last week, between November 10th and 12th, a Fermilab workshop focused on a possible future muon collider as a successor to the LHC (where, by the way, the full beam will circulate again before Saturday 8 a.m.) and a potential weapon to keep the U.S. particle physics in the game: 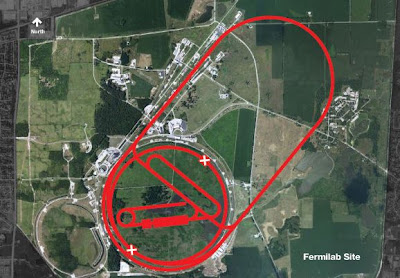 We are talking about a 1.5 TeV or 3 TeV center-of-mass muon-antimuon collider. See the following Fermilab resources:
Recall that the hadrons are heavier which means that they can be accelerated to higher energies. Leptons are lighter but they don't interact by the strong interaction which means that their collisions are cleaner and more accurate, especially when you look for new physics.

A hybrid that unifies both advantages would employ heavy leptons - namely muons which are heavier cousins of the electron. The disadvantage is, of course, that they decay quickly. In the rest frame, the mean lifetime of a muon is 2.2 microseconds which is the time that light needs to travel 660 meters.


However, the rest mass of muon, which equals 0.106 GeV, is inflated up to 1,500 GeV in the more ambitious collider, i.e. 15,000 times, which is the Lorentz factor that also slows down the decay. At these maximum velocities, the mean path before decay would jump to 10,000 kilometers.

So even at the intermediate velocities during the acceleration, you can achieve a lot. Of course, the radiation has to be safe, too. Muons mostly decay to electrons and a pair of (anti)neutrinos: the latter are almost invisible at low energies but behave almost like electrons if the energies are above the electroweak unification scale: that's a part of the meaning of the electroweak unification.

However, the decays are actually not the most difficult technological challenge: the security issue can be dealt with by building the tunnels 100 meters underground while the main problem of the decays is that they create additional fog in the detectors. But cooling is even harder. Muons are usually not created too peacefully - one needs a pretty high energy for them to be born. Methods to cool them down, especially in the transverse direction, have to be refined so that they can be squeezed into the tunnel and accelerated longitudinally.

Once this is done, muons and antimuons can be accelerated in several stages - first to 20 GeV and then to a TeV or so - by a combination of circular accelerators and linear segments.

We will see whether the muon collider becomes the next benchmark in experimental particle physics and whether it replaces another linear collider, The International Linear Collider. However, don't expect the muon machine to be ready before the end of the world in 2012. Adam Yurkewicz's guess is 2028.
Luboš Motl v 5:33 PM
Share