The most viewed article in The Guardian right now was written by George Monbiot yesterday:

Clive James isn't a climate change sceptic, he's a sucker - but this may be the reason

What a nice, polite, and concise title. ;-) This well-known alarmist admitted that the debate is over. The alarmists have lost. In his own words:

There is no point in denying it: we're losing. Climate change denial is spreading like a contagious disease. It exists in a sphere that cannot be reached by evidence or reasoned argument; any attempt to draw attention to scientific findings is greeted with furious invective. This sphere is expanding with astonishing speed.

He mentions some polls indicating that the number of global warming infidels vastly exceeds the number of believers. Monbiot argues that his fiercest opponents are in their 60s and 70s.

Well, your humble correspondent is probably not among his fiercest opponents because he's in his 30s - even though he also thinks that Al Gore should be electrocuted long before he would be allowed to become the world's first carbon billionaire. 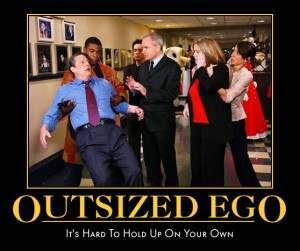 Of course, Moonbat safely avoids any signs of a climate blasphemy. He believes - or at least claims to believe - that the scientific literature supporting a catastrophic global warming became even more certain in the last two years than it had been previously (and if you remember, the certainty was already above 100% back in 2005).


And he even proposes an explanation why the climate skeptics exist: it's because all of them are actually enchanted believers in the Climate Judgement Day, i.e. children of the Cataclysmic Global Warming God. But because they're thinking about their frying death so often, they instinctively fight against the idea of the death, so they become deniers. ;-)

Dear reader, is it how you have become a denier? :-) Moonbat would surely be happy to learn that his theory is correct.

By the way, I watched both "Age of Stupid" and "Not Evil Just Wrong" during the last two days.

"Age of Stupid" (watch it live) is a pretty boring movie. I thought that there would be many dramatic pictures from the future but the one-minute counter between 2009 (today) and 2055 (end of the world, with a burning tree and a monkey) was the only reference to the future - except for the last man's media collection which didn't differ from Windows 7 too much and whose content was broadcast to the extraterrestrial aliens for them to learn something from our stupidity. :-)

The rest of the movie were random pictures from random places of the Earth showing ordinary things and some people claiming that things are changing. As far as I can say, it wasn't dramatic in any way. However, I may have been turned off for much of the movie: you must watch it yourself.

"Not Evil Just Wrong" (some people have downloaded it via eMule) is more dramatic, with DDT stories from Africa, touching pictures of brainwashed children who believe that the Earth is dying, ordinary Americans who will be affected by the cap-and-trade policies and who still want to meet Al Gore in peace, and many other things.
Luboš Motl v 10:12 PM
Share