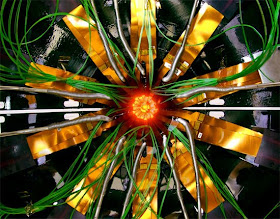 Over the weekend, the Large Hadron Collider smashed the first pairs of protons. Ever. See

As The Independent mentions in another article, the current center-of-mass energy was 1 TeV, so we have another Tevatron right now. ;-) 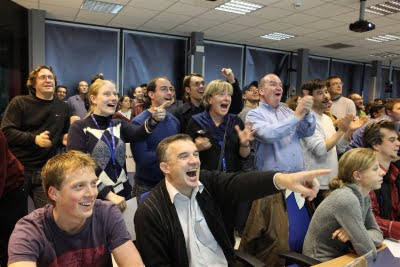 They're watching the LHC beams, not baseball!

Before the Christmas, the center-of-mass energy sqrt(s) should be raised to 2.4 TeV, bringing the LHC its global hegemony for the first time (the Tevatron collides at 1.96 TeV). Update: that much was achieved already on November 30th, so far without collisions.


Just a week or two after the Christmas, Brian Cox expects first collisions at 7 TeV (half the maximum capacity). Such collisions may already boast their huge discovery potential, of course.

Michio Kaku did some vulgarization of the LHC at Foxnews. ;-) He talked about Reagan's dream and his daily job of string theory research (for "living") - which, after 1999, seems slightly exaggerated to me. ;-)
Luboš Motl v 8:08 AM
Share