Everyone who has been to Prague must know what this is: 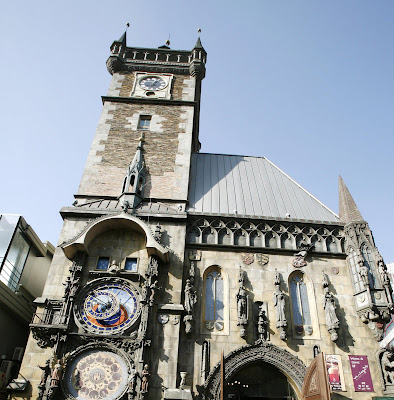 Yes, it is the Old Town City Hall with the Astronomical Clock ("Orloj"). But those who look even more carefully will also say: holy crap, the building on the left side from the city hall looks strange. It should be white and old-fashioned.

So you may be led to check the pictures of the real Old Town City Hall and indeed, the environment doesn't quite look the same.

The picture above is actually the "Castle Praha" restaurant, a replica in Seoul, Korea, near the Hongdae stop of the public transportation. And the astronomical clock is fully functioning! They brew slightly Koreanized, quasi-Czech beer over there, cook some quasi-Czech food, and a new Czech Info Center was just opened over there: a gallery.

We usually think that the Astronomical Clock and similar historical stuff is very precious - billions of crowns, to estimate the value of such things that can't be converted to the money. Tai H. Ham, the owner of the Korean restaurant fortunately couldn't find anyone in Korea who would produce a replica of the astronomical clock. However, the Japanese guys did it for him. And the price was only USD 100,000. And the owner of the restaurant says it wasn't cheap! ;-)


This is another unusual example of the Asian competitiveness. ;-) More generally, I think that there should be many more replicas of famous buildings all over the world.
Luboš Motl v 9:51 AM
Share