A few days ago, Indian government climatologists have released a 60-page paper about the

The document has combined the work of several collaborations that have investigated the changes of the glaciers in the world's highest mountains. They concluded that there was no evidence of local changes that could be attributed to the global climate change.

Jairam Ramesh, India's environment minister, was led to conclude that "There is no conclusive scientific evidence to link global warming with what is happening in the Himalayan glaciers."


If you look at the hierarchy of the institutionalized Indian science, is there a more powerful weapon than large teams of government-funded experts teamed up with the environment minister? In this particular case, there is one. A freaky vegetarian activist is apparently a more important weapon. ;-)

Rajendra Pachauri's message to the authors and to the minister was crisp:

"We [?] have a very clear idea of what is happening [?]. I don't know why the minister [?] is supporting this unsubstantiated [?] research. It is an extremely arrogant [!] statement."

Holy cow. They should feed him with one because the lack of proteins is clearly starting to affect the basic functions of his freaky brain. 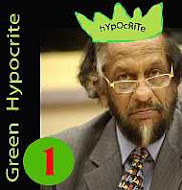 Quite suddenly, the "consensus" is no longer important for those people. Unfortunately, it doesn't mean that they have replaced "consensus" with "science".

They have - and Pachauri in particular has - replaced "consensus" non-science with even more unscientific unconsensual screams from one weird herbivore. You know, Mr Pachauri, the purpose of science is not to isolate non-arrogant propositions from the arrogant ones. The goal is to find the correct statements and eliminate the wrong ones and whether you or another whacko finds the scientific results arrogant is irrelevant.