As I was just informed by Marc Morano, The Heritage Foundation and other sources inform about new, highly enhanced competences of the U.S. president that will be activated according to the Boxer-Kerry or Waxman-Markey bills as soon as the concentration of "Kyoto" greenhouse gases - CO2, CH4, N2O, SF6, hydrofluorocarbons, perfluorocarbons, but not H2O - in the atmosphere exceeds 450 ppm. (I am sure that most lawmakers don't even know the list of the gases.)

That's very troubling politically, especially because according to some widespread ways to calculate the figure, the current value of the combined concentration is around 448 ppm and it could reach 450 ppm in 2010.

However, this whole story reminded me of a story due to Feynman,

In 1964, Feynman served on a Californian textbook commission attempting to choose the new textbooks for America to beat the Soviet Union in the outer space and beyond.

The textbooks contained almost no applications in science - or practical life, for that matter. They were renaming everything ("integers" became "counting numbers" etc.), the difficult stuff taught to the kids was useless (e.g. conversion from base-five to base-seven), and their authors didn't know what they were talking about so there were errors and misunderstandings everywhere.

Feynman would constantly be exploding in anger when he was reading these books - and he was the only guy in the commission who actually did so (and maybe the only one who wasn't bribed).


There are way too many parts of this story that look almost identical to the current practices of the global warming climatology. First, just like the IPCC, the commission was filled with largely incompetent, sloppy people who just wrote down some numbers (ratings) that would look reasonable to others, without carefully looking at the actual matters.

That's why the book that had not yet been printed - with the empty sheets of paper in between the covers - got the highest rating from the non-Feynman, IPCC-like members of the commission.

Groupthink and attempts to get "more correct" results about the quality of books (or about the length of the emperor's nose) by averaging the opinion of a large number of people is a strategy attacked by Feynman that was inherited by the global warming pseudoscientific movement without any modification.

But sadly enough, there are many other things that look almost identical.

One of the textbooks looked promising. It asked the kids "What makes it go?" Feynman thought that it would teach them why bikes were moving, and so on. Instead, the correct answer was always "Energy." Feynman was upset because it was just an empty word - and the statement that "energy makes it go" isn't even right (because the total energy is being conserved - it's just being changed from one form to another). The kids don't learn anything. The word "energy" could have been replaced by "wakalixes" and the pedagogic impact would be indistinguishable (zero), Feynman explained.

In the 1960s, the "energy makes it go" slogan was true at least in some superficial sense. The "climatological" variation of the slogan has nothing to do with the reality. Things have gotten much worse since Feynman's times. Many people literally want to brainwash children in the science classes today. And they are quite open about it. Some schools are even screening the movie by crackpot Al Gore - sometimes even during science classes!

Unfortunately, that's not the only analogy.

Feynman was also upset with another textbook that told the kids that John and his dad saw "N1" green stars, "N2" blue stars, and "N3" violet stars. Each color is linked to a temperature. The kid had to answer the question "What was the total temperature of all these stars?" ;-)

As you may remember, Feynman just exploded in disgust.

It makes no scientific sense to add the temperatures of stars - except if the final goal were to calculate the average temperature. However, this addition of things that shouldn't be added is common in the global warming legislation, too.

The very notion of "CO2 equivalent" belongs to the same category of sums that make no scientific sense. If you look at the glossary of scientific terms published by the EPA, you will learn that the use of "carbon dioxide equivalent" is decreasing:

As the bills currently discussed in the U.S. Congress indicate, unlike the "carbon equivalent", the use of the equally scientifically ill-defined term "carbon dioxide equivalent" is not dropping, quite on the contrary. ;-)

Clearly, the idea is that you are going to sum the contributions from greenhouse gases. Water must be explicitly omitted, otherwise you would get numbers way above 1500 ppm, the minimum concentration of H2O, the #1 greenhouse gas, in the atmosphere. 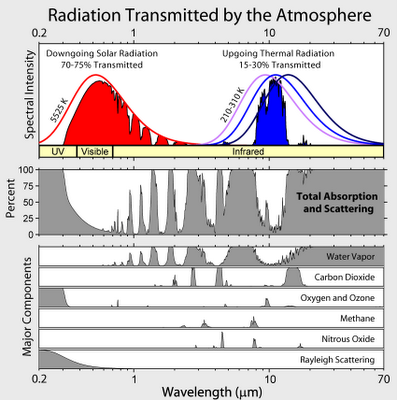 A chart from a talk of mine showing that the radiation transmitted and/or absorbed by the atmosphere (and the corresponding warming effect) is not the sum of the contributions from different gases - not even approximately. And water - and its overlaps with the other gases - is very important. For the sake of simplicity, dozens of other Kyoto gases are omitted.

For most of the mostly Democratic lawmakers who support the cap-and-trade legislation, the addition is the most complicated mathematical operation that they have ever heard of, so they probably think that the "CO2 equivalent" is a very deep and rigorous scientific concept. You won't be able to explain them that there also exist other functions "f(x,y)" of two variables aside from "x+y", and that the adding of things is not the right scientific procedure to make.

But even if you view the definition of the "carbon dioxide equivalent" as a political or legislative formula that is supposed to have no links with the actual warming hypothetically caused by these gases (and the overall normalization of this effect is the most unknown quantity - different estimates of the climate sensitivity differ by an order of magnitude), the concept is extremely controversial.

The politicians seem to think that if they say "carbon dioxide equivalent", everyone will agree what the term is supposed to mean and they can get the accurate result, at least from the scientists. But that's very far from being the case.

If you look at the EPA glossary, the global warming potential is defined as follows:

Global Warming Potential (GWP)
Global Warming Potential (GWP) is defined as the cumulative radiative forcing effects of a gas over a specified time horizon resulting from the emission of a unit mass of gas relative to a reference gas. The GWP-weighted emissions of direct greenhouse gases in the U.S. Inventory are presented in terms of equivalent emissions of carbon dioxide (CO2), using units of teragrams of carbon dioxide equivalents (Tg CO2 Eq.).

When you look at any details, you will see that the EPA definition has pretty much nothing to do with the definition found in Wikipedia, interpreting the 2007 IPCC report. By the way, the molecular weight of carbon is actually 12.0107 grams/mole and this "modest" 0.1% error is already enough to change 449 ppm to 449.5 ppm and speed up the police state by a few months. ;-) Be sure that there are much bigger ambiguities and errors hiding in the definition.

In that IPCC definition, the global warming potential of the gases is listed in a table. However, the values for different gases are vastly different for the 20-year, 100-year, and 500-year horizon, sometimes by one order of magnitude (for methane and HFC-134a). How these vague order-of-magnitude estimates that depend on the time scale and many other details are supposed to give you a unique "immediate" number used in the legislation that will "suddenly" give Obama special powers is beyond me.

(Consider e.g. methane. The surface methane concentration is close to 1.7 ppm. With the 20-year global warming potential of CH4, namely 72 (or 62 in the ill-defined parentheses), it translates to 122 ppm (or 105 ppm) while with the 100-year figure, 25 (or 23), those 1.7 ppm translate to 43 ppm (or 39 ppm) of CO2 equivalent. Try to talk about a unique result and don't forget that the stratospheric CH4 concentration is very different, around 1.2 ppm. All these detailed choices clearly matter for the exact result - if someone wants to distinguish 450 ppm from 451 ppm. The typical error of the figure you obtain just from the methane is something like 50 ppm by itself - and I have still neglected all the nonlinearities and spectral overlaps.)

In other words, Obama with any IPCC pseudoscientific interpreter is allowed to become the dictator at any moment if one of the bills is ratified during his reign.

The very basic features of the notion of the "carbon dioxide equivalent" are pseudoscientific in character because the linear formula that is implicitly assumed contradicts basic physical properties of the gases - overlapping spectral lines as well as the nonlinear dependence of the greenhouse effect for each individual gas.

So it is very clear that the definition of the "carbon dioxide equivalent" is not meant to be a scientific definition that may become more accurate when science makes further progress. From the very scratch, this definition is disconnected from the science because it ignores some key scientific facts, even the very well-known ones. And be sure that there are many more facts about the greenhouse effect of various gases and their combinations that will remain unknown for quite some time.

To summarize, terms such as the "CO2 equivalent" are pseudoscientific concepts that are being promoted by the people like Boxer and Kerry, crackpots who don't really have any idea what they're talking about.

There is no objective definition of the quantity mentioned in the bill - because the definition is not meant to be determined by the actual physics (it contradicts basic physics) - so the quantity will always depend on arbitrary conventions and ad hoc formulae that can be changed by anyone who gets the power to change these definitions (or include the effects of other gases or phenomena).

You know, a change of the definition that will alter the final value by 1 ppm (a seemingly modest amount) is enough to speed up the police state by half a year or so. Isn't it cleaner to clarify the situation by saying that the police state begins in January 2011, rather than to encode this plan into convoluted verbal constructions using ad hoc definitions that are detached from the scientific content?

It's extremely bad to design laws and treaties resembling the global warming communism. But it's even worse to give people additional powers "activated" as soon as some ill-defined, scientifically meaningless quantities exceed some arbitrary thresholds. It's hard to believe that a responsible politician could ever support such a bill.

Everyone who is supporting legislation of this kind is an irresponsible lunatic.