First, an off-topic message. The visitor #4,000,000 came to the main page of this blog from the stanford.edu domain with Internet Explorer 7.0 at 12:46:16, Californian time. Click the screenshot to zoom in. And congratulations. 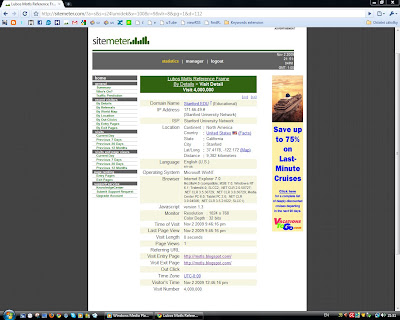 Back to the climate religion...

AFP and Space Daily, among others, inform about a meeting of nine of the world's most important religions at Windsor Castle.

UN chief Ban Ki-moon, who considers himself superior to approximately 9 major Gods who will be instructed by him what to preach about the AGW pseudoscience to their often mindless sheep, will launch the event under the banner "Faith Commitments for a Living Planet":


The defenders of a fight against climate change have realized that their ideology doesn't fit together with science too smoothly. It turned out that religion is the right framework for their goals.

Al Gore has come to the same conclusion.

As The Guardian reports, his newest sequel to "An Inconvenient Truth", namely the book called "Our Choice: A Plan to Solve the Climate Crisis" that was just published today, appeals to those who believe there is a moral or religious duty to protect the planet.

"Simply laying out the facts won't work," Gore concludes, especially if they support none of Gore's previous major propositions.

"Global warming and its impacts cannot be looked at just as a material problem. The root causes are spiritual," agreed Stuart Scott, whose Interfaith Declaration on Climate Change - calling for the "stewardship and reverence for creation" - has been endorsed by dozens of major religious organisations.


In July, some 200 Muslim leaders gathered in Istanbul to forge a seven-year climate change action plan. One of the measures adopted was the creation of a "Muslim eco-label" for goods and services ranging from printings of the Koran to organised pilgrimages. Their actions followed the example of the most influential Muslim pundit in the world.


And with that, it has become clear to all that they are the real tyrannical terrorists. In fact, the life of all of mankind is in danger because of the global warming resulting to a large degree from the emissions of the factories of the major corporations, yet despite that, the representative of these corporations in the White House insists on not observing the Kyoto accord, with the knowledge that the statistic speaks of the death and displacement of the millions of human beings because of that, especially in Africa. This greatest of plagues and most dangerous of threats to the lives of humans is taking place in an accelerating fashion as the world is being dominated by the democratic system, which confirms its massive failure to protect humans and their interests from the greed and avarice of the major corporations and their representatives.


It is not known whether Osama bin Laden, the author of the truly liberal thoughts above and the true beacon of the religious fight against global warming, will attend the summit at Windsor Castle and whether the participants will acknowledge his pioneering contributions.

Unlike many others warriors against the carbon sins, bin Laden talks the talk and walks the walk, too. In September 2001, he prevented hundreds of millions of tons of carbon dioxide from being emitted. He has not only stopped the CO2 exhalations by thousands of infidels but also decelerated their economy, right at the heart of the Great Satan in the New York City.

For Peter Newell, a professor at the University of East Anglia in England who had tracked climate activism for more than a decade, religion has the traction to haul a truly global movement. "It would be a huge mobilising force if people started to frame the issue of climate change in religious terms," noted Newell.

Another advantage of religion is that one can burn heretics. Welcome to the new Dark Ages.
Luboš Motl v 8:23 PM
Share