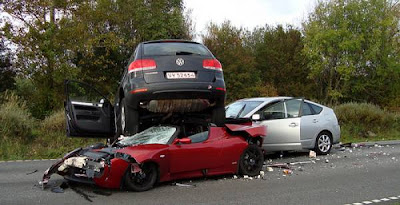 God called the wives of the drivers of SUV, Tesla, and Prius. "Your husbands are driving the three most important vehicles in the world. I must warn you that they are going to crash in a car accident soon."

The SUV driver's wife returns home and tells her hubby: I have two news for you. One of them is good, and the other one is bad. The good news is that God exists and the bad news is that you will crash your SUV soon.

The Tesla driver's wife tells her sweetheart: I have two bad news for you. One of them is that God exists because I just spoke to Him. The other bad news is that your Tesla will be smashed soon.

The wife of the Prius driver informs her spouse, too: I am bringing two good news to you. First, our dear Prius is among the three most important cars in the world. And the second good news is that it won't suffer from the catastrophic global warming in its lifetime. ;-)