Two months ago, Muammar Gadaffi used the United Nations to propose his ingenious plan to abolish Switzerland which is a "world mafia". The country should have been divided between France, Germany, and Italy. 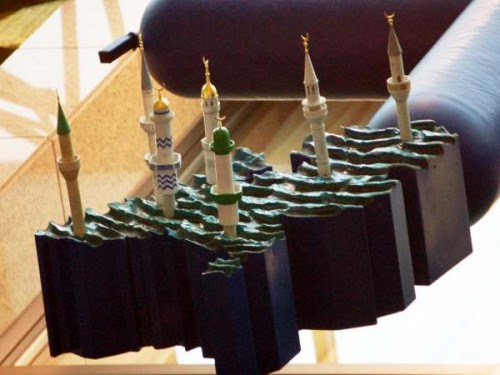 David Černý's Entropa. The only things left from the Netherlands after it is submerged in the ocean are the minarets.

Some unrelated news from Switzerland (and France): on Monday, 0:42 am after midnight Swiss time, the LHC has become the world's strongest accelerator, surpassing Fermilab's Tevatron, by having boosted two beams to 1.18 TeV each. They have yet to collide, to give us sqrt(s)=2.36 TeV, above the Tevatron's favorite 1.96 TeV.

Today, the Swiss voters were deciding whether minarets, the tall spires towering above mosques, should be banned in Switzerland. And over 57.5% of them (including majorities in 22 out of 26 cantons) decided that they should be banned, indeed. The turnout was high, 54%. They're symbols of the Islamic and Allah's architectonic arrogance and they are meant to be a tool of a believing majority to intimidate the minorities of infidels (and to call everyone to prayer): Google News.


By their decision in the referendum, the people agreed with the strongest party in the country - which is largely isolated - namely the Swiss People's Party (SVP). The SVP backing is a simple reason why the decision to approve the ban shouldn't have been too surprising. Moreover, the right-wing party was joined by radical feminists who realize that minarets look like erect penises and are therefore symbols of oppression of women. ;-)

I guess that Switzerland's decision to abolish Islamic minarets was more modest but more realistic than the Islamic Gaddafi's plan to abolish Switzerland. ;-)

Well, religious freedom is a great thing but as any freedom, it must end where the freedom of others begins, and the freedom of Swiss citizens to watch somewhere without being interrupted by an insensitive symbol of religious fanaticism may be more important than the freedom of the Muslims to build "gates of heaven and Earth" that only appeared 80 years after Mohammed's death.

Don't get me wrong. I have nothing personally against minarets. And e.g. the minaret in the Lednice Cheateau (see the picture on the left) in Moravia (Eastern Czechia) is fun exactly because it's so unusual in the Central European context. Still, I would prefer the European architecture that belongs here, like the rest of the Lednice chateau.

Switzerland, as a non-member of the European Union, has an unusual privilege to be able to make similar decisions. It will still be attacked in various European or international courts but it is likely to survive. I think that the EU countries wouldn't be allowed to decide in a similar fashion. 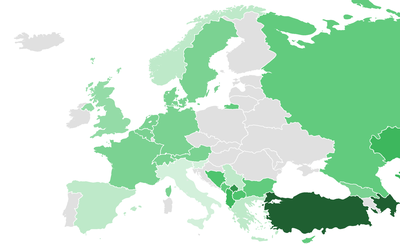 Clearly, the ban is not a serious problem for the Muslims. They can still build minarets in France and commute. I would still be more afraid of the EU - or Eurabia.

The media often say that the people were afraid of the Islamic "extremists". Well, I don't think this is an accurate description. The people don't necessarily have to believe in the threat of the "extremists". Most of them are simply afraid of "mainstream Islam" which is already bad enough for the people who prefer the values of Enlightenment. They're just afraid of the propagation of ordinary "mainstream Islam" around them. They have the right to try to suppress such tendencies on their territory because it's their territory.

Game: Click here, press "Spiel starten", and try to regulate the minarets. What happens if you fail?

Tolerance may be fine but it often brings some consequences. The relative tolerance of the West towards the Iranian nuclear program led Ahmadinejad to order ten new uranium enrichment plants today. At some point, others will notice that they have lost the control. This point might lie "just a few steps" beyond the green light for new minarets.

By the way, Switzerland has been described as an extremely tolerant country which is why some people expected the ban to be rejected. I think that this argument doesn't uncover the actual reasons behind the tolerance. The tolerance used to occur simply because Switzerland was only receiving the kind of foreigners who assimilated quickly - Western Europeans including the Portuguese, Serbs, and perhaps even the Tamil Tigers (Sri Lanka) were fine.

More exotic groups of people avoided the country because they were not ready to live in those mountains etc. But Islam obviously doesn't follow this line of abrupt assimilation and the Swiss people inevitably react in a similar way as other similar nations that face a significant share of not quite compatible ethnic minorities.

Switzerland is not the same place as the Arab or Muslim world, so religious institutions experience different conditions over there today. And the country has just voted that it doesn't want this fact to be changed in the future, either. Switzerland mostly wants to stay the enlightened Western country we have known for several centuries and Allah's calls to prayer from the minarets were identified as a threat to this basic identity of this canonically Western nation.
Luboš Motl v 6:41 PM
Share