A trailer for a CNN program. The square between 0:18 and 0:20 is our Pilsen's Square of the Republic.

Twenty years ago, I was a high school sophomore and a young dissident of a sort. With a few colleagues, we didn't join the Socialist Youth Union and created a small version of Charter 77 instead. We lived in a regime that was largely emptied of the belief in its principles and in its future.

Nevertheless, even in 1989 when governments were collapsing in Eastern Europe and perestroika had been rebuilding the Soviet Union itself for years, the socialist regime in Czechoslovakia looked remarkably robust. Our leaders were forced to talk about perestroika and they even had to do something - but they surely didn't like it.

It was hard to imagine that something could seriously change about the system because most people looked entirely indifferent. However, events that are hard to imagine sometimes happen, anyway.

November 17th has been an important day in the Czech history for quite some time. On October 28th, 1939, students in the new Protectorate of Bohemia and Moravia celebrated the 21st anniversary of the birth of Czechoslovakia. The Nazi forces suppressed the rally. A student, Jan Opletal, was seriously wounded and died on November 11th.

His funeral on November 15th transformed into another anti-Nazi student rally. On November 17th, the Reichsprotektor (the German union's commissioner for the Czech lands) sent 1,200 students to the concentration camps, executed 9 of them, and closed all Czech universities.

You may see that anniversaries have played an important role as explosives for new events, providing the Czechoslovak history with a kind of rationally explained periodicity. ;-) It was no different in November 1989.

On Friday, November 17th, 1989, students commemorated the 50th anniversary of the Nazi pogrom against the Czech schools. It was an excellent opportunity for college students to express their dissatisfaction with the lack of freedom and democracy in the socialist Czechoslovakia.

They were marching from Albertov, the headquarters of the Faculty of Natural Sciences of the Charles University in Prague: Albertov is pretty much where Albert Einstein crystallized his key ideas needed for general relativity around 1911 and it's about 100 meters below Karlov, one of the four main places of the Faculty of Mathematics and Physics. The rally was beaten by the police forces. Rumors that one student was killed were spreading quickly. The rumor was bogus it was surely helpful to accelerate the events.

I quickly learned about the events from Radio Free Europe. During the weekend, pretty much everyone knew what was going on. The students were viewed as innocent people, "our kids", so pretty much ordinary people who didn't care about politics became concerned a bit. The actors went on strike. After a few days, other occupations joined them one by one.

On Monday, November 20th, we would return to schools and the revolution was felt in the air.

On that first day, I organized a poll, asking people to guess when the communist boss Mr Milouš Jakeš (who had complained that he stood alone like a fencepost in his famous July 2009 talk near Pilsen: today, he wants to be paid for copyrights just like other comedians) would resign, when the federal government would be replaced. It just happened that your humble correspondent himself correctly and completely accurately predicted that the first date would be November 24th while the second date would be December 3rd. Quite a coincidence - or a prophecy? ;-)

There would be many rallies, especially large rallies in Prague (one of them attracted one million people). Everyone - including our high school - was writing petitions. Almost everyone was hoping that the paradise was coming (which was partly to the naivité of many people), everyone behaved nicely to others. The events were extremely fast. The leading role of the communist party - a key regulation defining the totalitarian system - was erased from the constitution on November 29th.

One month later, on December 29th, Václav Havel would be unanimously elected the Czechoslovak president by the federal Parliament. This really meant that even the numerous communist deputies who would be keeping him in the prison just a few months earlier have voted for him to lead the nation. ;-)

Of course, a friendly as well as not-so-friendly bullying by the Civic Forum was partly behind their decision to vote Yes.

The Civic Forum was the main non-communist party or movement whose main goal was to beat the communists in the first democratic elections in 1990. This conglomerate combined all political forces of all flavors that had some problems with the pre-1989 socialism. You may imagine that it was pretty unreadable.

Eventually, it was decided by the key people that we wanted to avoid third ways, apolitical politics, and similar postmodern constructs. Václav Klaus became the leader of the Civic Forum for a while but his immediately realized plan was to establish a standard conservative party that had much more well-defined (and therefore potentially controversial) opinions but that actually became much stronger politically than the "diluted" remainder of the Civic Forum.

Meanwhile, Miloš Zeman who wasn't terribly left-wing quickly adopted the role of the main democratic opposition politician (against Klaus): for this purpose, he revived the old and conventional Social Democratic party. (I won't discuss another opposition politician, Dr Miroslav Sládek of a racist "Republican" party who was a Mr Bean's lookalike, even though he managed to penetrate to the Parliament a few times.)

Similar developments were occurring in Slovakia where "The Civic Forum" was called "The Public Against Violence" and where the nationalist and separatist plans had always played a much more important role than in Czechia.

Klaus oversaw the economic transformation including liberalization of prices, convertibility of the currency, privatization, and many other essential steps. It worked very well, much like the Velvet Divorce at the end of 1992. Many other events occurred since 1989 but I don't want to enumerate all of them.

Obviously, Czechia and Slovakia are much happier today than they used to be. The citizens enjoy a much higher economic growth rate, the freedom to say and do anything, opportunity to travel, the right to choose politicians from lists of competing alternatives. We live in a cleaner, prettier, healthier, more colorful environment.

There also exist people who are dissatisfied with the new system - usually for understandable reasons: they were parts of the machinery that was benefiting from the previous socialist regime. Many other people also complain in the polls - but that's really because they're free to do so and complaining is one of the activities that Czechs like to do.

Well, there are many things I would like to say about the history, the improvements, the evils of socialism that are being forgotten, especially by the younger generations, and other things, but I didn't plan to write an extensive text today... 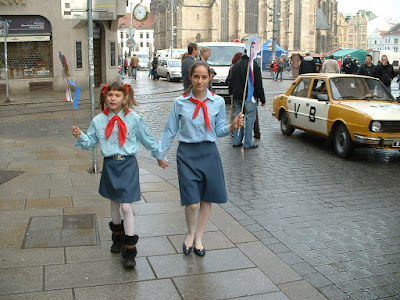 Click the picture for a few more images of this kind (press left-right arrow afterwards). Unedited galleries of all pictures I took: Pilsen, Prague.

In Pilsen, the most noteworthy event is that the Smetana Street has been transformed into the Totalitarianism Street where you can buy under-the-counter products for the old socialist prices. ;-) I am just going to look, before going to Prague in the afternoon again.

Update: Prague was very nice, too. Around 10,000 filled the National Avenue (Národní třída). The concert featured Václav Havel, Joan Baez (not John Baez), Michael Kocáb, Vladimír Mišík, Dan Bárta, and others. We redid the Albertov-National Avenue march from 1989, and people had a lot of interesting and/or crazy banners, balloons and so on and so on.
Luboš Motl v 8:56 AM
Share