50% of Northern White rhinos migrate from Czechia to Kenya

Imagine that 50% of the people who live on this blue planet, or 3.4 billion humans, were suddenly moved from one continent to another. It sounds difficult. 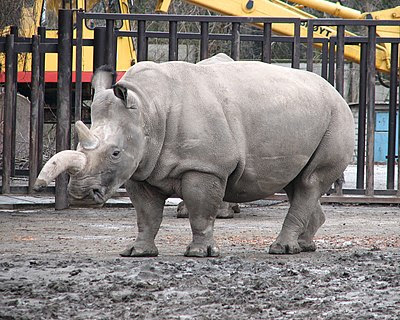 However, the same thing - proportionally speaking - is going to happen to the species of Northern White rhinoceros.

The last four African guys in Africa have been missing since 2005 - even though there may have been 30 pieces living in the wild a decade ago. So there are eight individuals left: six of them live in the Czech Republic (Dvůr Králové ZOO) while two of them live in California (San Diego Wild Park).

Just to be sure, each Czech guy is not called "rhinoceros" which is a Latin mixture of two Greek roots meaning "nose" and "horn", but rather "nosorožec" [naw-saw-raw-zhets] which comes from "nos" (nose) and "rožec" (horner, but not Chris). The Czech language has developed full localized translations for pretty much all taxonomic names for all species that exist in Latin.

The director of the Czech ZOO and others just began to realize the plan to relocate four rhinos (male: 38, 29 years; female: 20, 9 years) from Czechia to Kenya (which is not exactly where the last African ones have lived, but OK).

Well, I am not so sure. It seems obvious to me that an optimized artificial environment is much safer a framework to keep a few last animals of a species from extinction. Nature is cruel.

On the other hand, it may be true that the rhinos feel a bit cold in Czechia. The annual mean temperature of the air in Czechia is just +7.3 °C (average over territory): the local annual mean temperatures go from 0.4 °C on Sněžka, our highest peak that we share with Poland, to 10.1 °C in Prague-Klementinum (urban heat island). And if you care, it's -13 °C in Pilsen, record cold -19 °C in Liberec, Northern Bohemia, and -8 °C in Dvůr Králové ZOO right now.

(Until today, I thought that 10 °C was the national average - and it's just Prague. We urgently need at least those 3 °C of warming to get to somewhat more tolerable levels - to Hungary's 10 °C. And additional 10 °C of warming wouldn't be bad at all.)

The annual mean temperature is around 28 °C in Kenya's North plains, 19 °C in Nairobi and 26 °C in Mombasa. So the rhinos will suddenly face a climate that is warmer by something like 20 °C. Of course, they may be genetically programmed to prefer the much warmer weather. But they will have to face many new unknown threats, including hunters and parasites. The latter was a complaint in a protest of 30 veterinaries and others.

If I wanted to maximize the chances of preserving them, I would personally keep them in Czechia and gave them some extra heating and lighting systems. ;-) You know, unlike polar bears, these guys are really endangered and Nature is way too statistical and unpredictable.
Luboš Motl v 8:49 PM
Share