The Guardian and others report a political nuke that has exploded in Copenhagen and which has been added to the ClimateGate:


This newly leaked document - penned by various American, British, Danish, and other socialist politicians - was supposed to be the "draft agreement" to be agreed upon in Copenhagen (pretty unlikely). The document was meant to liquidate some basic "Kyoto"-like qualities cherished by the poor countries. Its main principles are the following:
To compare, the current carbon emissions per capita in Germany or the Czech Republic is something like 3.5 tons per capita (multiply by 44/12 to get the carbon-dioxide emissions). The poor countries wouldn't be allowed to exceed 40% of the current Czech figure which is not terribly high by itself. 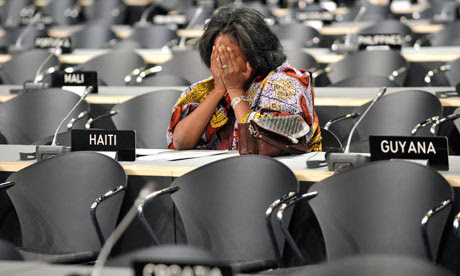 A Haitian delegate just realized that she's been pissed upon by the PC socialist crap from the rich world.

As the Guardian admits, the obvious plan was to keep this "draft agreement" secret and prepare its publication for the visit of Obama: this particular puppet was supposed to bring enough "momentum" to force the poor countries to agree with anything so that the behind-the-scenes negotiations of the "guys who really matter" are enough. I hope it can't happen right now because the representatives of the third world seem to be devastated and shocked and they will be able to stop it.

The global warming proponents represent a truly distasteful mixture of global socialism, regulation, selfishness, hypocrisy, and the good old racism - including the desire not to allow other nations to do things that you're allowed and able to do, ever - and imperial ambitions to rule the world.

Let me assure the poor countries that if they need a war to fight against this horrible AGW thing and the immoral people who are responsible for it, they shouldn't be afraid to begin because such a war would quickly become a civil war in the civilized world, too. And we will win.
Luboš Motl v 7:05 PM
Share