Douglass and Christy about the DCPS and ClimateGate

Two years ago, this blog described an interesting paper by


in the International Journal of Climatology. It argued that the relationships between the surface and upper troposphere warming trends are very different in reality and in the existing climate models. That suggests a serious problem with the models - and implies that the models may overestimate the CO2 sensitivity by a factor of 2 - 4. 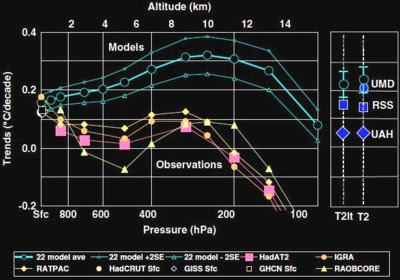 We don't want to talk about the technical issues here. This article is about the process of peer review and publishing. Today, in the American Thinker, David Douglass and John Christy wrote a fascinating reconstruction of the events that led to the publication of their paper and a certain reply by Santer et al.:


Douglass and Christy knew something about the process of peer review and publishing but the ClimateGate e-mails have expanded their knowledge about the procedures - and especially the behind-the-scenes tricks - by a huge factor. So they could reconstruct the events.

It's just a stunning reading. I would write a similar summary of the corrupt aspects of the process, but let me reproduce theirs instead. Their reconstruction proves

There's a lot of stuff about the violations of the standard rules who is allowed to respond, when, about the delaying the DCPS paper, speeding up the reply, systematically giving Santer et al. more channels to reply, efforts to identify the anonymous referees and to change them, asymmetric treatment of pictures, and so on. Most of these dirty tricks that obviously give the advantage to one side have been successful.

One could say that people like Santer can do things of this sort because they're nasty thugs and gangsters. It's totally true but it's just one part of the story. The other part is that there exists a broader context - a network of non-scientific pressures on science - that made it possible for the "chosen one" to violate pretty much all possible written and unwritten procedural and moral rules of the process of objective peer review and publishing.

It seems impossible to compare this stuff with high-energy physics. I have never seen anything comparable. You know, I have reviewed something like 100 papers in my life and I rejected approximately one half of them. But the review is the end of story. It's just not up to the author to intervene into this process beyond the task he or she has been given which is just a peer review.

But the results get through additional filters when the people try to reproduce them and build upon them. So when you weight the published papers by their impact - or the number of citations - the average paper with an impact is much more likely to be correct. It can still be wrong - and whole communities and research programs can be wrong - but at least the probability that it suffers from some visible problems is significantly reduced.

In climatology, some people obviously wanted (and managed) to have a "complete power" over everything - what is published, which tricks can be used, what is hidden, and who can beat the crap out of whom. That wouldn't spoil the scientific results if the people who control everything were perfect saints and perfect scientists. Except that they're manifestly not. They're much closer to the perfect devils and bad scientists.

In fact, one could think that a complete power over the institutions almost inevitably corrupts a scientist. A scientist simply shouldn't get powers that exceed some objectively written rules. When he gets these additional powers, he may inevitably start to behave as Santer et al.

Proper science simply can't work in this way. For proper science, all kinds of scientific papers and results that pass the same objective criteria must be given the same conditions, until a difference between their validity emerges in additional objective tests. A friendship between editors, authors, and referees, or their ability to subtly or not-so-subtly blackmail someone by pointing out that there are allies outside science can't count as an objective test.

These principles have been vastly violated in the "climate change" sensitive portion of climatology - the estimates of warming, the influence of CO2, climate reconstructions, and validation of models. This whole discipline got completely corrupt and the results must be largely thrown away. A completely new wave of writing papers and validating them has to start almost from the scratch because the noise and/or the amount of missing facts in the majority of the existing papers in this discipline is just way too high.