The Financial Times and others report that the EU has promised to pay EUR 2.4 billion per year to the third world. This amount should be repeated thrice, between 2010 and 2012, to give them a total of EUR 7.2 or 7.3 billion.

That is pretty much equal to the amount promised by Obama, USD 10 billion, on behalf of the U.S. 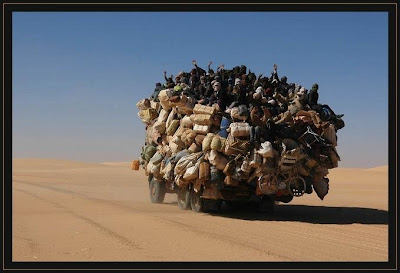 Many people in Africa are using cars efficiently. ;-)

For some of the poor countries, this modest amount could be a welcome contribution to their funds. Except that they will have to waste these funds instantly - for a "fight against climate change". Consequently, the help may actually end up being a negative one because the money is going to be used to suppress their industry.

Remotely related: on Wednesday, a unit of Green U.S. Hitler-Jugend (Greenshirts) has stormed a conference in Copenhagen attended by Lord Monckton, among others. This is how this aggressive trash will be behaving increasingly more frequently unless we stop them. Don't worry: Lord Monckton wouldn't shake his hand with those guys. On the other hand, the green shirt girls are sure that they don't have to listen to Lord Monckton.

On the other hand, the Czech Republic whose carbon emissions per capita are equal to those of Germany ;-) has only promised EUR 12 million per three years which is EUR 1.20 per capita or EUR 0.40 annually, 20 times smaller an amount than the French or British per-capita figures. ;-) It's still a waste of money but EUR 1.20 per three years is something that most Czechs will probably survive. ;-)

Still, some countries have promised nothing: see a table.

Dear Germans, Britons, and Frenchmen: you keep on electing politicians who make this scam and the survival of preposterous notions such as the "climate debt" possible, so you will have to pay for the expenses that this scam will bring.

Needless to say, these are irrelevant games involving negligible amounts of money. The money needed to substantially change the global CO2 emissions would be counted in trillions of euros per year (and their impact on the global mean temperature would still be undetectable). 7.2 billion euros is equivalent to nothing. In fact, The Daily Telegraph argues that the carbon fraudsters have already pocketed 5 billion euros from carbon trading, more than 1/2 of the aid to the whole third world.

This high percentage shouldn't be too surprising because The Telegraph estimates that 90% of the carbon market activity in some European countries is accounted for by the carbon trading fraudsters. And this figure is relatively low ;-) because it only counts the fraudsters according to the current definition of fraud. Needless to say, when the "fraud" is defined to agree with the conventional understanding of this word, the percentage of carbon fraudsters in the carbon trading industry will jump from 90% to 100%.

All this stuff is a massive crime and many of the prominent guys in this "industry" should be hanged. So far, we continue to live in an era when the politicians from big EU countries openly support this organized crime while the politicians from other EU countries such as Czechia - who realize that this is just about stealing of billions from the taxpayers - are paying lip service to this habit by their symbolic EUR 1.20 contributions.