In November, I wrote about a haunted house in Spooksville ("Strašice"), an aptly named village near Pilsen where things such as power outlets and towels, among many others, were mysteriously ignited approximately 60 times a day. 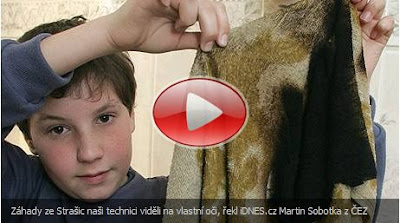 The needed natural (if you allow me to avoid the word "supernatural") phenomena to explain the effects were so diverse and unusual that I decided that the effects had to be man-made. The little boy, Mr Jiří Mraček (12), shown on a well-known picture with the towel above, became my prime suspect, especially because he is a bright guy with achievements in math and biological olympiads, among other contests. And he's been the primary "messenger" of many of the strange effects.

When I was as old as he is today, my interest in possible unusual phenomena that would require some really exotic ;-) physics was peaking. I have never really believed them but I was interested in various "stories" and "arguments" supporting their existence and I surely did think that all other people had to be completely excited by such things, too. And I had some tendencies to produce some paranormal hoaxes, too.


Six weeks ago, I made an expedition to the house. It was a freezing day but I spent half an hour by discussions with the owner of the house and his son. Because I wasn't able to convince the son to confess - although I may have been pretty close - I decided that the subjective probability that he was the mastermind behind the strange effects decreased. However, it always remained my most likely single theory. 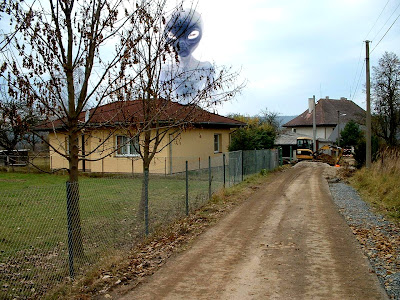 Click to zoom in: can you find a poltergeist causing the miracles on the picture? What a strange cloud. ;-)

Yesterday, the boy confessed that he was behind the striking "self-igniting towel", a broken window pane, a broken aquarium, and probably other things. It's likely that he has done everything - although I don't know details about his methodology with the outlets etc. The police has closed the investigation of the case.

The damages were minimal: the family has to pay for a few outlets that cost a few bucks while the electric utility company has only paid a few dozens of thousands of dollars for the grounding of the fields around the village and the excavation work around the house. They will survive - until the future socialist government will steal all of their corporate profits - billions of dollars - and distribute them to the socialist voters, as the billboards are already promising us. ;-)

What a criminal socialist scum.

But back to those mysteries. The energy required to "naturally" create such effects would have to be huge and would have to be carried by very high-frequency electromagnetic waves. It was very unlikely that something like that could survive in the vicinity of the house once the house was grounded by those tons of additional wires around the field etc. And it would have been unlikely that such a form of energy wouldn't create many other things - for example, it would be surprising that it hadn't killed the inhabitants yet.

Also, all the nearby suspicious facilities - a water house and a new photovoltaic power plant, aside from some Czech and maybe even U.S. military facilities - were apparently "desynchronized" with the mysterious events. Their turning on/off and changed schedules didn't seem to affect the timing of the effects in the haunted house.

Dr Luděk Pekárek of SISYFOS, the Czech counterpart of CSICOP, has believed that the son was the "author" of the strange phenomena from the very beginning. He has persistently worked on the case and he ultimately helped to decisively solve it. Congratulations.

The boy still argues that he has only done a part of the events, in order to speed up the investigation of other, genuinely strange events, but it's plausible that this remaining fog will be gradually disappearing, too. Recent articles in the Czech media about the resolution:

The officials of ČEZ, the electric utility, insist that the boy couldn't have done everything - but it could be just due to their effort to hide that they're idiots who have wasted a lot of money. ;-)

A message is that the theory postulating the absence of paranormal phenomena is extremely robust. Another message is that your humble correspondent is always right, including some fine details, even if he becomes less certain about the truth himself. ;-)
Luboš Motl v 8:12 AM
Share