How to eliminate ENSO from global temperatures

After 1998 and 2005 which were warm because of the 1997/98 and 2004/05 El Nino episodes, the champions of climate panic would emphasize how catastrophically warm these years had been and suggested that it was a result of the industrial CO2 emissions. They would never mention the natural cause of the relative warmth. 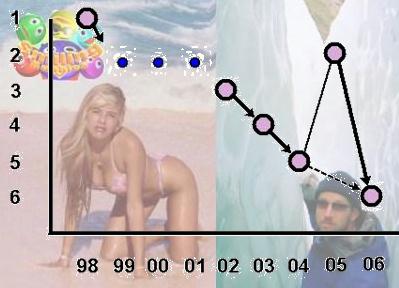 However, as 2005 and especially 1998 are getting distant memories of the past, their warmth is becoming increasingly inconvenient. So the same champions of climate panic emphasize that those years - especially the more distant one - were only warm because of the natural factors, namely El Nino. They should be erased, hidden, the "right" temperature for those years - whose greatness was worshiped and emphasized in the past - should be lowered, and so on.

The hypocrisy, inconsistency, and purposefulness of this attitude is flagrantly obvious. I think that all of us realize that those people lack the basic honesty and they're orders of magnitude from something that could be called scientific integrity.

However, it's still true that there was a strong El Nino in 1997/98. It would be a complete methodological failure to eliminate one episode by hand, especially now when the El Nino that is underway already reached 5/6 of the maximum strength of the 1997/98 El Nino. Is there a consistent way to remove the effects of El Nino and La Nina conditions?

Let me tell you about a good method. Its final conclusion will look satisfactory: it will explain virtually all of the variations in GISS time series in terms of the El Nino ONI index (the ENSO 3.4 regional index averaged over 3-month periods). However, I will also explain why the coincidence had to work. Some numerical checks will indicate a consistency between the NOAA El Nino data and the GISS data. After all, they use the same sources although they focus on different regions. Nevertheless, the agreement will be found "too good".

So let me begin.

First, I have manually copied the ONI index from the NOAA PDF file to my TXT file. Also, I have added 1.5 for the October-November-December period of 2009, which is now almost exactly known +-0.1, and estimated 1.7 for the following overlapping 3-month period. All 3-months periods will be attributed to the middle month among the three so the two numbers mean that the year 2009 is complete.

The GISS global temperature data were extracted from the corresponding page, too. First, I calculated the correlation coefficients between the ENSO vector and the GISS vector, with "x" months of lag, assuming that ENSO influences GISS with this lag. 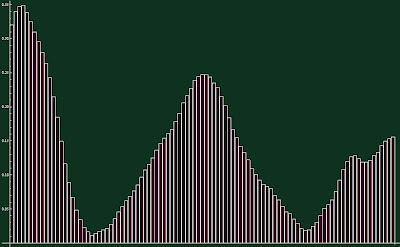 You see that the graphs are surprisingly smooth. The correlation coefficient is always positive which should surprise you, too. It's because both vectors actually include an increasing trend in time; I will discuss this issue later.

The graph says that the correlation coefficient slightly increases to the maximum at a 3-month delay and then it slowly decreases to a minimum at a 21-month delay. Then it starts to rise again, reaching another maximum when the delay is around 50 months. Another minimum is near 80 months, and new maxima are at 90 and 100 months etc.

I only took the 22 correlation coefficients for the lag between 0 and 21 months, and calculated the appropriate "delayed" combination of various ENSO data, to get the best prediction for the GISS data. This combination of the ENSO ONI index with various combinations of lags looked much like the GISS record. In fact, the residuals look shockingly small and trendless: 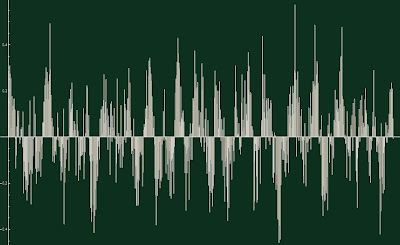 Clearly, this is just some noise. The Pythagorean average value of a residual is just 0.165 °C - that's the typical error of my prediction of GISS temperatures from the previous 22 months or so. It covers both all the temperature trends as well as the high-frequency meteorological noise. In plain English, the GISS temperatures for every month are almost exactly encoded in the previous 2 years of the ENSO anomalies.

You should be shocked by this huge accuracy: it seems that you need neither the solar activity nor CO2 nor cosmic rays nor anything else. I was shocked, too. So I was looking for the reason. And it wasn't hard to find it. Prepare to be amused and then disappointed. ;-)

In a previous graph, I showed you the correlation coefficients. I took 22 of them in order to construct the best prediction of the temperatures from the ENSO anomalies. While the maximum ones were close to 0.35, their sum was just 4.37. And the best linear fit that approximated the GISS anomalies had the coefficient of 0.226 in front of the delayed ENSO combination.

Now, you should realize that 1/4.37 is 0.229, almost the same number. So the key aspect of the agreement is that the ONI numbers - which are some temperature anomalies in the Pacific, after all - had to be multiplied by coefficients whose sum is almost exactly equal to one.

At this moment, you should have appreciated that the ONI anomalies - that measure whether we are experiencing an El Nino or a La Nina episode - are nothing else than some particular temperature anomalies in °C. If you ignore lags up to those 21 months, these temperature anomalies are almost exactly equal, with the error of just one percent, to the GISS global anomalies.

This also means that the increasing proportion of the El Nino episodes is an artifact of the definition of the El Nino and La Nina thresholds. Whether we have an El Nino or a La Nina is determined by the sea temperature anomalies in the central Pacific Ocean - but the anomalies are computed relatively to a historical baseline that isn't being increased according to the increasing global mean temperatures.

So it's clear that with this definition, the ONI ENSO anomalies are increasingly often positive - and above the 0.5 °C threshold for El Nino episodes. I am afraid that I must tell you that the definitions of the episodes are such that the increasing proportion of El Nino episodes relatively to La Nina episodes is pretty much an inevitable consequence of the 20th century warming.

Well, I shouldn't confuse correlation and causation: the causal relationship could go in the opposite direction, or both functions of time could have a common, third cause.

My personal recommendation to the ENSO people would be to use a different ONI index, the LUMONI index, which is the old ONI index minus the global mean temperature anomaly averaged over the same period. The LUMONI index would actually describe the "inherent", "relative" dynamics in the Pacific Ocean, not being contaminated by the global trends.

It seems that such a LUMONI index would be completely useless to predict the long-term global temperature trends.

However, I am still puzzled by the amazing one-percent accuracy - the agreement between 0.226 and 0.229 above. This seems to indicate that in the long run, the temperature anomalies extracted in the Central Pacific Ocean have the same trend, within a one-percent error, as the global temperature anomalies. I don't understand why it is so. The Arctic (and even the moderate zones) should have experienced a faster warming than the tropics, right? Maybe the Central Pacific Ocean is something else than the tropics? Maybe, the Central Pacific Ocean is the ultimate representative of the "average" place on the planet? Maybe, only the variations in the polar regions are larger but the true trends are almost equal to those in the tropics?

But if you really believed that there are some inherently Pacific phenomena that determine the changes of the Central Pacific anomalies, the impressive correlation above would indicate that the same mechanisms determine the evolution of the global mean temperature, too. The Pacific Decadal Oscillation could be a prime suspect.

A simple Mathematica notebook (also includes some previous, "integrated" models of the ENSO influence that I no longer find good enough: the current analysis is found at the end of the file):