The LHC is the largest experiment ever built. The circumference of the tunnel is 27 kilometers. And there are thousands of physicists working on it.

How much time does it take for the physicists to collect a sufficient number of events, evaluate them, calculate the charged particle pseudorapidity density, get the approval of a thousand of collaborators, write a 14-page preprint in LaTeX, and submit it to arXiv.org? 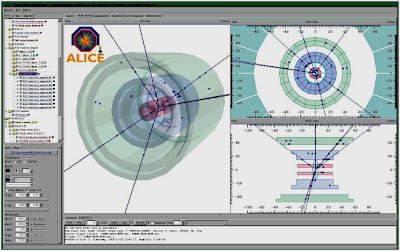 The first event counted as a pp-collision at the LHC; the distances are in centimeters. The paper contains a very high-res picture. Click to zoom in.

Recall that for a comparably large collaboration in climate science, the IPCC, a similar task takes 6 years and the result is just a political diatribe without any new quantitative results. So what's the required time scale in particle physics?

The correct answer is actually "five days." Yes, it's kind of incredible. On Wednesday, November 23rd, both beams were running at 0.45 TeV per beam (it was before the energy was raised to 1.18 TeV per beam). They really didn't plan it ;-) but some proton-proton collisions occurred, too.


Well, so the ALICE collaboration took these 284 events and sent them to a computer code that has probably been ready for quite some time. The result was submitted on November 28th:

ALICE: First proton-proton collisions at the LHC as observed with the ALICE detector: measurement of the charged particle pseudorapidity density at sqrt(s) = 900 GeV

The previous data from CERN's SppS collider are confirmed, suggesting that the LHC works perfectly. Note that the center-of-mass energy, sqrt(s), was 0.9 TeV: one half of it comes from each beam. Right now, they can do similar things at sqrt(s) = 2.36 TeV. After (or around) the Christmas, this number should be raised to 7 TeV before it reaches the projected LHC maximum, 14 TeV, later in 2010. However, the luminosity will have to be boosted quite a bit, too.

The first preprint hasn't discovered any new physics, of course, but the speed we have seen could be a remote indication of the speed with which new physics will actually be discovered. I guess that they may have prepared detailed plans - including subplans for various scenarios depending on what will be observed - so the discoveries could be pretty fast, indeed.

The most shocking discoveries are likely to be made by ATLAS and CMS which is another reason why ALICE's leadership in disciplines like "the first paper" is a good idea. ;-)P.S. String theorist Ashoke Sen won one of the five "Indian Nobel" (Infosys) awards, including a $100,000 cheque. Well deserved, congratulations.
Luboš Motl v 6:08 PM
Share