Micronesia will be sunk by a Czech coal plant, wrote a protest memo

This story seems to be beyond parody. You couldn't make it up except that Michael Crichton was able to predict the story in his State of Fear which included a class action lawsuit on behalf of the people of the island nation Vanutu:

The Czech ministry of environment has received a request from the Federated States of Micronesia for a transboundary Environmental Impact Assessment of our biggest coal-burning power plant in Prunéřov ["proo-neh-rzoff", Google Maps], the 18th largest institutional producer of CO2 in the world whose further expansion has been scheduled.

It may be the first time in the human history when such a transboundary, 13,000-kilometer (along the surface) lawsuit occurred. 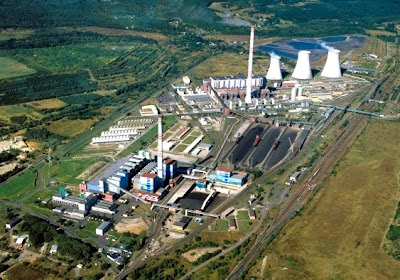 The idea is that the carbon dioxide emissions from our power plant will lead to a sea level rise that will sink the islands of our Micronesian friends. So let me perform the Environmental Impact Assessment for them.

According to the IPCC, the maximum sea level rise in this century will be 80 cm - or even 40 cm, depending on the confidence levels. In his hugely insightful and entertaining talk in Berlin, Nils-Axel Mörner, a top sea level expert, has actually convinced me that the centennial sea level rise in the next century can't exceed 10 cm (although I was originally skeptical about his basic statement). But let me accept the 80 cm figure.


Also, it is likely that only a small portion of the rise will be caused by industrial CO2 emissions - because the rate of the sea level rise has been comparable or even much greater even when the human activity was minimal. But again, let me be generous and assume that the whole 80 cm will be caused by the CO2 emissions.

The Micronesian authors, in their very e-mail, claim that the planned expansion of the power plant will add 0.021% of the world's CO2 emissions in the next 25 years. Let me accept this figure, too.

Now, the most nontrivial part of our assessment will be a procedure known as multiplication. It's a rather complicated operation so I ask our Micronesian friends for a little bit of patience. That's fine but I don't actually have the patience to explain multiplication to someone who displays no significant hope of ever learning it.

At any rate, the super-maximum upper bound for the sea level rise in the next 25 years is 80 cm over four which is equal to 20 cm. And 0.021% of it is equal to 42 microns. So for those 25 years that they find so worrisome, our upgraded power plant will add at most 42 microns to our Micronesian friends' sea level.

But I am not cruel at all. Instead, I recommend the Czech government to send a picture of a blonde Czech supermodel to the chieftain of the Federated States of Micronesia. The photograph will increase his or her potency sufficiently for the average ability of the Micronesian nation to survive 42 additional microns of sea level rise. The image above should be enough to add those 42 microns to the length of the Micronesian emperor's ... nose.

So a photograph for the chieftain sounds as a good deal, doesn't it? Meanwhile, the writers of Czech biology textbooks should think twice which mammals and their groups and nations should be counted as homo sapiens ("wise man" or "knowing man").

In the green world, reality means something very different than it does in the real world and Mr Jan Rovenský of Greenpeace CZ, whom I know very well, took the job of George Morton of State of Fear and sponsors this lawsuit against the Czech power grid by those 48,000 friends in Micronesia. He may have even invented this whole "lawsuit".

Jan has become a hired gun who is doing complete nonsense and/or works on the destruction of the civilization during 100% of his professional time, so this shouldn't be too surprising. But what is more worrisome are the news that a big portion of the Czech ministry of environment is literally working on this complete idiocy, to put it very politely. Wouldn't it be more sensible to nuke Micronesia off the map than to let them decompose our very political system in this way?

If that's found unhuman, well, we will have to sue the Micronesian chieftain for possible health risks associated with his smoke signals.

Meanwhile, Czech public TV is going to broadcast a program about me in half an hour so I am slowly going to bed in order not to see it. ;-)
Luboš Motl v 9:01 PM
Share