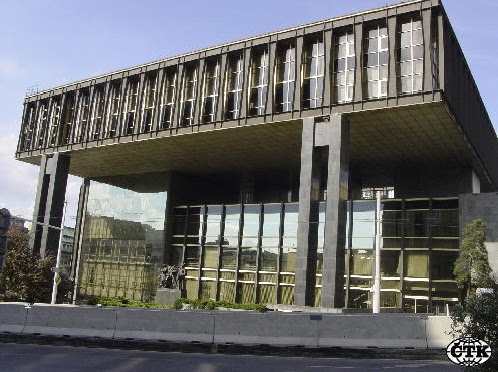 Many people like to say that Saddam Hussein's regime wasn't a threat for the civilized Western world. The following story speaks a different language.

The building above used to be the communist federal Czechoslovak Parliament (The Federal Assembly). After the Velvet Revolution and the Velvet Divorce, the original purpose disappeared and the building became the headquarters of the U.S.-funded Radio Free Europe in 1998. The station focused on various Muslim countries around that time.

It's located near the National Museum at the top of the Wenceslaus Square, the main commercial avenue in Prague: Google StreetView. The main railway station is 400 meters away on the other side and the state opera is 10 meters away, across the street.

As AP and lots of Czech media report, Saddam Hussein ordered the attack against the building in 1999 or 2000. The Iraqi spies have successfully smuggled in weapons for the attack, including an anti-tank (rocket grenade propelled) missile RPG-7, six machine guns (more precisely, four Kalashnikovs and two Heckler-Koch submachine guns), pistols, and 2,000 rounds of ammunition in a diplomatic vehicle. The attack was planned from a particular (rented) apartment window, 80 meters away from the radio building. Lots of money were paid for the plan.


Our BIS (the Czech FBI plus CIA plus Superman plus a few former KGB agents combined) managed to uncover and thwart the attack, much like some attacks against Jewish targets in Prague at the same time. Good job. The result was that in April 2003, weeks after the U.S. invasion to Iraq began, the Iraqi embassy in Prague voluntarily gave the Czechs all the weapons that should have been used.

Before you get terribly excited about the supernatural abilities of our BIS, it's useful to learn that the Czech authorities were actually informed about the planned attack by the Iraqi ambassador ;-) who was kind of disgusted by the plan.

However, before you conclude that it was easy, I have to tell you that it was actually the present Iraqi ambassador, Dhia Mahmoud Dabas, who used to be a dissident living in exile in Vienna at that time. Nevertheless, he had learned about the attacks from the former Saddam's consul who was asked to supervise the attacks. ;-) Quite a bizarre flow of information and diplomats, right? At any rate, the consul was extradited in 2001; five of his comrades followed in 2003. It's unknown when the attack was supposed to be executed. My understanding is that it could still have happened after the U.S. invasion if the latter hadn't taken place.

The "Shark" (sculpture by David Černý) was executed later.

Armored transporters were protecting the building for a few months at that time. During 2009, the radio moved to Praha-Strašnice, into a new secure building in Hagibor.
Luboš Motl v 5:17 PM
Share