What does "1.5 °C above pre-industrial levels" mean?

The dignified representatives of the world's countries who gathered in Copenhagen enjoy many childish games. But one of the favorite ones was a pissing contest: who can restrict the rise of the global mean temperatures more toughly?

Some primitive tribes from some small Pacific islands - such as Tuvalu and Kiribati - want to improve the previous 2 °C limit proposed by officials from richer countries. They demand that the globe's temperature will never jump more than 1.5 °C above the pre-industrial level: Google News.

You can see that the difference between the wild tribes who have just jumped down from a tree on one side and the carbon diplomatic representatives of the rich countries on the other side is a factor of 3/4.

Their pissing game - which is supposed to eat trillions of dollars - is based on the thoroughly unscientific, inherently creationist assumption that there was only one temperature before the man built his first engines. But the temperature was changing at all time scales. Even if the humans have contributed something to the warming - which is conceivable, theoretically justifiable, but supported by no empirical evidence - they have surely changed nothing qualitative about the existence and character of natural climate variability. Look at these reconstructions, possibly the best ones we have today: 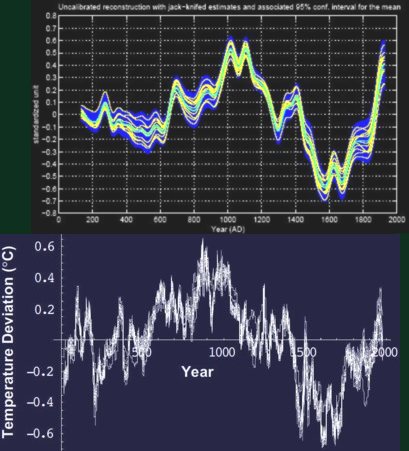 For example, according to the Loehle reconstruction, the "temperature deviation" in 1700 was around -0.6 °C while it was close to 0 °C around 1770. Well, the year 900 was also pre-industrial but the temperature anomaly was close to +0.6 °C at that time. Even when you look at the most recent millenium, the temperatures in different years differed by more than 1 °C.

Because they believe that the temperature has increased by 0.8 °C since the pre-industrial times, they must mean a year between 1700 and 1800 as their pre-industrial day of creation. But which one?

Even if those people agree what temperature we're going to be subtracting, it's still impossible to agree on the temperature difference with the impressive accuracy of 0.1 °C. Different teams that publish their global mean temperature data have very different ideas about the trend.

For example, UAH MSU satellite measurements end up with a 0.13 °C per decade during the last 30 years when GISS claimed something like 0.2 °C per decade which is 50% higher. So if our Tuvalu leaders allow us an additional 0.7 °C of warming and we extrapolate the trends from the last 30 years (which almost certainly understates the warming), we will have 54 years left according to UAH MSU but only 35 years according to GISS.

If the 2 °C figure is adopted, we are allowed 1.2 °C of extra warming which is 92 years according to UAH MSU and 60 years according to GISS. So our remaining time before the U.N.-sanctioned catastrophe is something in between 35 and 92 years but it may also be negative or, more likely, millions of years.

Even after the bloody crackpots exterminate billions of cows or people or prevent them from driving, the global mean temperature will keep on jumping up or down by something like 0.2 °C per decade, 0.8 °C per century, 2 °C per millenium, 8 °C per ten or more millenia (and cooling into another ice age is likely to be the next step on this timeframe).
Luboš Motl v 9:10 AM
Share