13 °C of warming would be fine for life

People have been brainwashed by the climate hysteria for years. So it's not shocking that many of them began to uncritically repeat many of the misconceptions. Nevertheless, I am always surprised by the lack of independent rational thinking - even when it comes to the people who are expected to be sensible.

A first book about the ClimateGate is available at amazon.com: click the icon to buy (after several more clicks and choices)

For example, let's ask what is the temperature change - the change of the global mean temperature - that would threaten the existence of life as we know it. By this statement, I mean an existential threat for humans and/or most of the species we know today.

I find it completely obvious that something like 13 °C of warming (10 times the change expected in the next 100 years, even if we extrapolate the recent 30 years) would not constitute such a threat. The most important picture in this discussion is the following map of the annual mean temperatures: 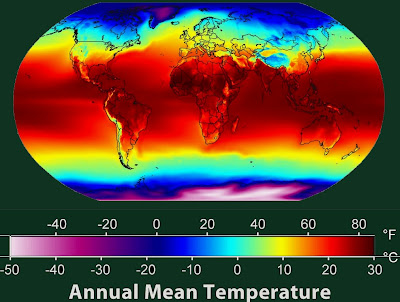 Originally I chose the figure 13 °C in order to optimize the weather in the Czech Republic. The annual mean temperature averaged over the Czech Republic is 7 °C. By looking at the climates that the Czechs enjoy, I decided that 20 °C is the optimal annual mean temperature for the country. Prague would probably still be about 3 °C warmer but in average, it would still be cooler than Rio de Janeiro is today.

When the global average increase would be 13 °C, it could match the increase in the moderate zone - e.g. in Prague. The places that are "more polar than Prague" would probably warm up slightly more than 13 °C - say up to 20 °C - while the places that are "more equatorial than Prague" would warm up slightly less than by 13 °C. I said that the polar regions would only warm up by 20 °C and not e.g. 50 °C because the amplification by the ice-albedo feedback and other things related to the melting of ice only work if one is close to 0 °C. If you get above it, the amplification goes away.


Now, it's a simple exercise to look at various places of the Earth - on the annual mean temperature map - and see what they would look like after this hypothetical warming. Central Europe would resemble Florida or Northern Africa - except that the solar radiation wouldn't increase too much so that we wouldn't need as much pigment. ;-) By design, Czechia was programmed to be changed into a paradise.

Some deserts - Sahara or those in Australia - would really suck. Unless big changes would occur in precipitation, Australia would become effectively uninhabitable: but even today, only 0.35% of the humans (and a similar percentage of life) live on the smallest continent. Australia is just not important for the big picture of life.

But it's important to realize that the drought is caused by a combination of the geographic location and winds that don't bring enough humidity. The tropical forests in Brazil are hot but they are great for life and its diversity. These things wouldn't really change much. And you would be surprised how much life would thrive in the places that are already warm today. The tropical forests can provide other species with a very pleasant ecosystem.

In 2008, the greeting ceremony for the President of Russia was held at the Al Aziziyah residence of Libyan leader Muammar Gaddafi. In 1922, the city recorded 57.7 °C.

Some people think that life starts to die en masse near 50 °C, within a day. But that's far from being the case. The warmest temperature recorded by thermometers in a city on Earth occurred in September 1922 in Al Aziziyah, Libya, when the temperature went to 57.7 °C (note that the greenhouse gases didn't play much role in 1922 yet). The inhabitants did just fine and the current population of the city is around 300,000 people. The highest annual mean temperature among all settlements is in Dallol, Ethiopia. With 34 °C, it's 27 degrees warmer than the Czech Republic.

In my world +13 °C, Northeastern Siberia would still be too cold. On the other hand, the central Siberia would be as hospitable as Europe is today. It would be pretty easy for many animals, plants, and people who would prefer such a climate to move there if everyone had 100 years to do so.

Because the Antarctica would stay well below zero, most of its ice sheet would remain intact. I even think that most of Greenland's ice would survive. The sea level would rise by a meter or two or three. That would surely be a problem for the hypocritical alarmists who are afraid of a doomsday but who have bought expensive real estate for their carbon indulgences somewhere in Florida. But it would be nowhere close to a threat for life on Earth. You know, this is a completely different category.

The Tibetan Plateau and Canada would resemble Central Europe or Northern U.S., too. All these places would be nice to live.

Oceans would warm up by less than 13 °C because the changes of the lands' temperatures are more pronounced and the ocean has to experience smaller changes for the average to be close to 13 °C. At any rate, the warmest regions of the ocean would be close to 37 °C which is the officially recommended perfect bath tub temperature for babies.

There would be no dinosaurs. Some people are imagining that slightly warmer temperatures result in a completely different composition of life forms. But they kind of fail to realize that it takes millions of years for completely new species to evolve. The existing species would experience no problems with temperatures that differ by a finite amount - something like 13 °C. Many dinosaurs actually lived in the same temperatures as we live today. The difference is not about the temperatures.

Of course, the higher temperatures would be most convenient for different species than the lower temperatures, so after some time, life could evolve in a different direction. But this is a very different process from an existential threat for life.

Some people may be confused by the observation that the ice ages - when the globe may have been just 8 °C cooler than today - sucked. It was extremely hard for life to thrive, at least in the currently moderate latitudes. So they imagine that a world that would be warmer by 8 °C has to be equally bad.

But this is simply not true. There is no symmetry here. The ice ages are bad simply because a big portion of the Earth sinks sufficiently deeply below the freezing point so that the ice sheets survive for the whole year and they are growing. It's somewhat hard to live under a mile of thick ice.

Because the annual mean temperature in the Czech Republic is 7 °C today, temperatures that are 8 °C lower are enough to move below zero, and if some additional criteria are satisfied, the ice can grow. The life is vulnerable towards a few degrees of cooling because we are just 15 °C above a qualitative point, a phase transition - I mean the melting point of ice.

However, things are very different on the positive side. The next truly qualitative point - the boiling point of water - is at 100 °C which is 85 °C above the global mean temperature today. We're extremely far from it and nothing much is happening to the "existence of life" if you just slowly approach this point.

Note that the greenhouse effect has no chance to achieve the relatively modest 13 °C warming described above. Even if the doubling sensitivity were 4 °C, the upper end of the IPCC overestimated interval, you would need more than three CO2 doublings to get those 13 °C. That means to multiply the CO2 concentration by a factor of 10 or so. You can't get 3880 ppm even if you burn everything that contains carbon and that you can ever burn.

More realistically, the feedback-free doubling sensitivity is 1.2 °C. You would need more than 10 doublings to get to 13 °C. That's almost like multiplying the CO2 concentration by a factor of 1024 i.e. to 40% of the air (assuming that the log dependence survives, even though it doesn't quite survive in this form) - you clearly can't do it. ;-)
Luboš Motl v 10:43 AM
Share