Officials in Florida are preparing the people across Florida for below-freezing temperatures. Record cold temperature hits Iowa. I could forget some of the remaining 48 states of the union so let me just say that CNN reports that deep freeze across the U.S. will get colder. 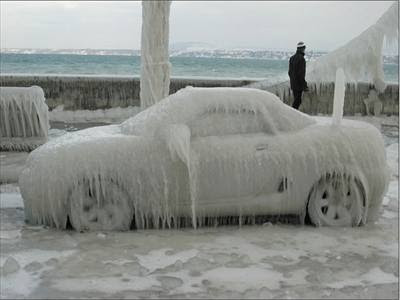 The United Kingdom experiences a very cold winter that is likely to last at least for another month (and Piers Corbyn adds February, too - let's see whether his prediction will become a failed guess). In the U.K., December 2009 was the coldest one since 1981. And BBC had this title. However, they had to change the title because it was humiliating the greatness of the Global Warming God (GWG) and the true believers got rightly offended by the truth: the truth is unacceptable, they said, and BBC agreed.

Well, let me be even more balanced. It's plausible that they hve found out that December 1995 was colder in the U.K., after all.


Needless to say, Central Europe is cold and covered by snow, too. I took about 120 pictures of a nicely snow-covered Pilsen today. You may say that this cold weather is surely found in a tiny portion of the continents - just Europe and America ;-) - so it has nothing whatsoever to do with the greatness of "global warming".

However, Asia has joined the team, too. For example, hundreds of flights from and to Beijing were grounded due to the heaviest snows since 1951. South Korea is buried under record snow, too. And so is e.g. Vermont as I have failed to mention so far.

Idiots who govern the world's most populous country aside, do these weather events prove that we're entering a new ice age? No. Do they prove that the year 2030 will be cooler than 2010? No. Do they disprove various statements that "global warming" has gotten far enough to make cool winters on a whole hemisphere - winter that "we used to know" - virtually impossible? You bet.
Luboš Motl v 7:19 PM
Share