Czech Catholic boss: why Europe is threatened by Islam 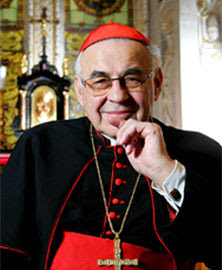 Yesterday, Czech cardinal Miloslav Vlk - who is soon to be surpassed either by Jan Baxant or Dominik Duka - answered 24 questions in an interview.

He described his views on the life of Christians before and after the fall of communism; some of his unsuccessful plans for a religious awakening in Czechia; the secularization of the life; interactions between Czechia and Europe; his unsuccessful papal candidacy; idiosyncrasies of individual Popes; integration of Christian churches; the interactions with judaism and the influence of some Jewish thinkers on him.

However, his most widely cited answers were concerned with the expansion of Islam in Europe. See Google News.

20) What should be the right solution of the painful problem of Palestine?

I understand that the original inhabitants of Palestine with Jerusalem as its capitals are the Jews. The whole Old Testament blesses and strongly confirms this idea. It's equally true that the Muslims have been living on those places for a long time, although in a secondary way. I think that the two sides should agree that Jerusalem will be the Jewish capital and certain areas of Palestine will be left to the Muslims, assuming the guarantees that the Islam won't threaten the Jews.


21) Do you think that Islam is threatening Europe and Christianity?

One issue is the question of immigration by which the Muslims are creating majorities not only at schools, because they have many children, but also in cities. And they have a potential for further growth. So the math is simple here. By the systematic emptying of the Christian contents of the Europeans' lives, a void is being created that is easily filled by them. Europe has renounced its Christian roots from which it has grown and which could equip it with the strength to resist the threat of being "conquered" by the Muslims which is already happening, after all. In the late Middle Ages, the Islam didn't manage to take over Europe by using weapons. Christians had won then. Nowadays, the battles are fought with "spiritual" weapons. Europe doesn't have any while the Muslims are armed with them perfectly. That's why the fall of Europe is a genuine threat. Muslims are coming here become of diverse reasons. One of them is a religious mission - to bring the spiritual values of the belief in God into the pagan environment of Europe and its Godless lifestyle - as they like to say.

We must therefore be prepared to expect that if Europe doesn't change its attitude to its own roots, the continent will be islamized. One-sidedly absolutized human rights are yet another driver that opens the door to such a future. Christianity is under pressure from Islam: we must live our belief at full speed. It's one of the signs and challenges of our age.

22) According to demographic studies, many Western European countries - the Netherlands, Sweden, Belgium, Germany, or Great Britain - are on their way to become predominantly islamic countries in a few decades. In your opinion, what does it prove?

So far, these changes are dominated by immigration and the natality gap rather than conversions. However, the future may bring a wave of conversions to Islam, too. And it shows what I said just a minute ago: the spiritual emptiness of the dominant lifestyle of our formerly Christian Europe. It shows individualism which is no longer willing - and sometimes even unable - to bring the sacrifice. It is allergic to the very word "sacrifice". Unless the Christians "wake up", the islamization of the lives may arrive and Christianity won't have the strength to imprint its character onto the lives of the people - and surely not onto the life of the society.

23) Isn't the ultimate role of Christianity to be the interpreter between the expanding Islamic European majority and the declining secular minority? Wouldn't it be a truly paradoxical result of the modern developments?

That's a question. But even to play this role, Christianity would have to be a living religion that excites the respect from the Muslims, as well a religion that preserves the best fruits of the European civilization - the sense for the human dignity, uniqueness, freedom, and for the co-operation with God in the transformation of the world. It would surely be a paradox given the ambitions of the New Age when it was coming to the scene. And a famous verse from Psalms comes to my mind:

24) A question and a complex answer about buddhism...

By the way, in a poll at the Czech Press Agency, 88% of the readers answered that they are worried about the Islamization of Europe.
Luboš Motl v 12:09 PM
Share