Related local news: A friendly weather forecast for Monday in Pilsen, Czech Republic: -22 °C. Holy crap. The records of the server only go back to the 1990s or so, it seems, so the record cold temperature is -15 °C in 2006. That will be beaten by 7 degrees centigrade if this prediction turns out to be true.

Eduardo Ferreyra has kindly given a tip to Anthony Watts who could report, together with Warwick Hughes that the Danish Center for Ocean and Ice has released the temperatures in the extreme Arctic - above 80°N - from the beginning of 1958. 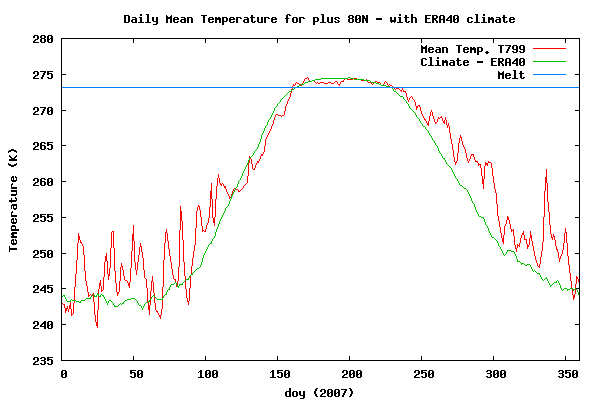 This example is a graph from 2007. It's amazing how the fluctuations pretty much disappear in the summer and only exist in the winter. I have noticed a similar tendency in the Prague weather data.

Among other things, we learn that in the first 22 days of 2010, the temperature in this circle dropped by 14 °C. Incidentally, this is more than those 13 °C whose impact we recently considered. But the change occurred in 3 weeks rather than 100 years. ;-) Today, the temperature in the extreme Arctic is at its lowest level since 2004.

A fast, approximate explanation of the recent cooling is that the Arctic oscillation was unusually tightened up in recent weeks which "protected" the cool places in the Northern Hemisphere from the inflow of heat from the South.

It just happens that the disk around the North Pole, above 80°N, is approximately what is not directly measured when the UAH satellite data are calculated. It makes sense to "close the hole" in the observed regions and combine the UAH data with the Danish extreme Arctic data into a weighted average.


Note that the circle around 80°N has a radius of approximately 10,000 km divided by 90 which is 1,111 km. The area is approximately "pi.r^2" which is 3.8 million squared kilometers or so (the effects of curvature are small) which is 0.75% of the total surface area of the Earth (510 million km^2). So 14 °C of cooling in the far Arctic would mean 0.0075*14 = 0.1 °C cooling contribution to the global average if the Arctic region were included. Now, 0.1 °C is not huge but it is nonzero, much like the estimated contributions from the latent heat of snow. Many such phenomena apparently matter once you start to care about fractions of a degree.

My understanding is that UAH team actually guesses the temperature poleward of 82°N or 82°S, by interpolation, and I guess that this interpolation doesn't see the "Danish" cooling in the extreme Arctic, so one could indeed get a better idea about the global changes if the Danish data were included. It may be sensible for UAH to publish a new product where the disks around the pole(s) would be taken from the Danish source (and/or a similar source that looks at Antarctica if it exists).

Update: John Christy was kind enough to clarify the treatment of the Arctic in their product(s): 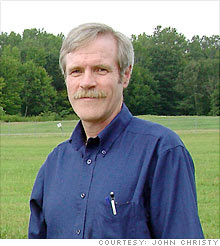 I quickly read your post about Arctic cooling. We generate two products, one is daily zonal anomalies and the other is monthly gridded anomalies. The daily zonal (used in http://vortex.nsstc.uah.edu/data/msu/t2lt/tltglhmam_5.2 for monthly anomalies) range from 83.75S to 83.75N (i.e. no over-the-pole interpolation.)

The Telegraph has a new and detailed look into the GlacierGate. The original quote that the IPCC cited actually appeared in an unimportant Indian environmentalist journal.

But it would be bizarre for the IPCC to cite this Indian source, so they found out that a similar later interview in Nude Socialist was used by WWF in 2005. That's what they cited. However, it also turns out that the very author of the bogus Himalayan 2035 alarm was working for Pachauri in TERI and helped him, by this very "prediction", to secure a half-a-million contribution from a U.S. charity than went to their pockets.

Pachauri now claims to have nothing to do with the 2035 prediction - although he recently claimed that the 50-times accelerated devastation was a sure thing and the competing predictions were inevitably "voodoo science" while the Indian government that allowed such alternative, less catastrophic reports to emerge was "arrogant".

Expect (and search for) a new bombshell about Pachauri within hours (embargoed until noon, Californian time). The old and new things may become a real PachauriGate. It's here: WUWT, HighNoon. Ten million dollars of the EU taxpayers' money were obtained for the bogus 2035 claim.

Meanwhile, Dr Murari Lal, the co-ordinating IPCC lead author for Asia, admitted that he knew that the 2035 statement had no science behind it. It was included purely to create pressure on the politicians, he says - another skeptics' statement was just confirmed by the IPCC. Murari Lal confessed because railway engineer Pachauri had claimed that only the scientists below him are responsible for the Himalayan blunder.

So Murari Lal is trying to blame the blunder on the political parts of the IPCC. However, Nigel Lawson's organization will publish a document on Sunday showing that Murari Lal had ignored the criticisms of the glacier statements. So it's obvious that most IPCC officials at all levels, not just the very leaders, are garbage.

The Times also say that WWF has screwed the arithmetics: they divided by 21 not 121 when they were computing the 1-year rate from the 121-year rate.

Another articles in The Times adds another scandal to ClimateGate, GlacierGate, financial PachauriGate, and ExtinctionGate: NaturalDisasterGate. The IPCC Fourth Report has also claimed that the disasters in the 1970s were linked to global warming, a statement that is both ludicrous (because of the average and stagnant temperature in that decade) as well as, fortunately, unsupported by any peer-review literature - except for one paper that later said that it had found no statistical evidence for the influence of global warming on the losses. Critics were silenced once again. The IPCC will have to revise this stuff, too.

Of course, the whole IPCC report is made out of lies and semi-lies so they will have to work for decades to fix the latest IPCC report. It will be especially slow if they allow the same crooks to do the job.
Luboš Motl v 6:51 PM
Share