Many people think that the globe must be terribly cold these days. We've seen huge cold snaps and snowfalls in Britain, Eastern parts of the U.S., Western Europe, Central Europe, China, Korea, and India where hundreds of people have frozen. 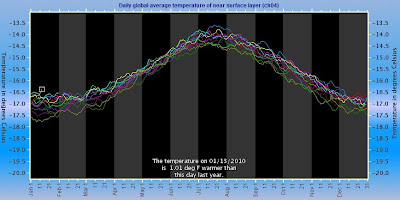 So these are almost all the important places, right? (At this moment, the speaker forgets that there are places such as Latin America, Australia or the Balkans which have been warm.) So the globe must be cool - cooler than average, people could think.

However, the daily UAH global mean temperature shows a different story. The early January 2010 was warm. And on January 13th, which is the latest day whose temperature is known, we have seen the warmest January day on their record. The brightness global temperature near the surface was


(Update: I noticed that January 1998 was already missing in the UAH daily Java applet which only began in Summer 1998. It's plausible but far from certain that a January day in 1998 was warmer - but very unlikely that there was a warmer January day observed by UAH before 1998.)

By the way, you can see why this temperature anomaly could have been increased exactly by the extraordinarily high snow cover. The latent heat needed to create the extra snow in January 2010 could have heated up the atmosphere by as much as 0.2 °C.

Of course, some alarmists might feel happy for a while. They've been afraid that the worries about a new ice age could escalate. And they've been saved: the global weather is warm again. The strong El Nino episode (which is underway and approaching the 1998 levels of the ONI index) could have helped them - or someone else. It's important that they're saved. ;-)

However, there is another, more important consequence of these numbers. And it is the following: the global mean temperature is irrelevant for you and for everyone else, too. It didn't help the hundreds of frozen people in India, the passengers whose flights were canceled, and millions of other people in the European, Asian, and American civilization centers.

If you actually draw the monthly data from 1979 to 2009 - the global ones and those in e.g. Prague - you will find out that the correlation coefficient is just 0.17 - well below the maximum possible value of 1.00. It won't be much higher outside Prague, either. :-)

So while it may be fun to watch the global temperature - a meaningless game that many people began to play in recent years because of the AGW fad (and yes, your humble correspondent only plays these games because others do, not because it is scientifically important) - it is very important to realize that the changes of the global mean temperature are irrelevant for every single place on the globe. They only emerge when things are averaged over the globe - but no one is directly affected by such an average.

Even if you accumulate a whole century of changes, the relevance of the global temperature will be essentially non-existent. A 1.5 °C warming of the global mean temperature is still less than one standard deviation of the monthly average at a given place. And the "local" climate may also shift - the January 2100-2150 average may be warmer than the January 1950-2000 average in Prague by much more than those 1.5 °C. Different regional climates change differently and most of these changes have nothing to do with the changes of the global mean temperature!

By the way, it's almost certain by now that January 2010 will also be the globally warmest January on the UAH record - the anomaly will likely surpass 0.70 °C. It may even see the highest (or at least 2nd highest) monthly UAH anomaly since December 1978. I will print more exact predictions in a week or so.
Luboš Motl v 7:55 PM
Share