Greece: the Trojan horse in the eurozone 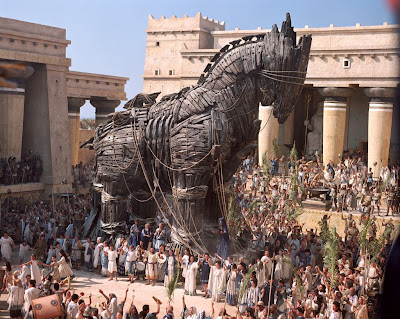 Greece, a cradle of our civilization, has been living beyond its means for quite some time.

In 1981, it joined the European Union. That's exactly the year when the junk socialists from "PASOK" took over the country. With the exception of five years, 2004-2009, they've been ruling the country for almost three decades. The three decades are going to be completed soon because they clearly won the October 2009 elections, too.

In 2002, the country ultimately joined the eurozone, after a few years of preparations: the drachmas were abolished. It seems pretty obvious that the socialists have fabricated the fiscal data, and if they did not, they would have never been able to join.

Today, the Greek GDP capita (PPP) is $32,000 or so. But it's clear that this high figure is artificially constructed out of debt. I find the Greek figures scary.


In the U.S., people used to talk about the "twin deficits". Greece knows them, too. But they're scarier. The latest budget deficit was about 12.7 percent of the GDP. It's just huge. And what about the trade deficit? In 2008, their exports were at $29 billion while the imports were at $94 billion, more than thrice as much. The public debt currently stands at 113% of the GDP.

And the real numbers may actually be even worse than that because the Greek officials were found to falsify their fiscal data in the recent times, too.

Suddenly, this horrible macroeconomic environment and irresponsible policymaking has come under some criticism from the European Central Bank and many others. To borrow more money, they must clearly offer a much better interest. At 113% of the GDP, the country may be slowly falling into a vicious cycle in which the repayments are so high that they choke the economy and make it even harder to repay the debt in the future.

The Greek government and central bank clearly use a different, less strict approach to many problems. If Greece had an independent currency, it's obvious that it would be substantially weakening right now. That is the most natural way to restore the competitiveness of a whole country. The trade deficits would get less severe, the exports would increase, and the tax revenue would increase, too.

This can't be done now, when Greece belongs to the eurozone. Even though the other countries' fiscal policies are independent, they share their fate with Greece, through the common currency. And they must choose a solution. None of them is perfect.

So I think it's somewhat more likely than not that ECB and others will try to keep Greece in the eurozone. If Greece were expelled, I have no idea how the regulations would fight against the widely expected significant weakening of the new drachma and the related speculations. It could be a mess.

If this is the case, it is also hard for me to imagine that Greece could be allowed to go bankrupt. Even a "gradual" bankruptcy would shake the whole eurozone. By the very fact that the eurozone shares a currency, the other countries simply have to care what's happening in Greece and they must think about the ways to help - despite the uncontrollable irresponsibility of the Greek politicians.

Of course, such things shouldn't have happened in an "ideal" eurozone. It has policies that the budget deficits can't surpass 3%, and so on. Except that these regulations have become jokes. You could call these policies "a wishful thinking". Try to compare 3% and 12.7%. These regulations can't really be enforced because one can make a "case" that there was a crisis, and the poor Greeks must be forgiven, and they must also be forgiven for a few years that follow. They must always be forgiven - which is an easy principle for them to learn.

The European Union is very efficient in terrorizing individual citizens and companies. But it can simply do nothing against the irresponsible behavior of the whole governments. So I think it's a bad idea for a group of countries to share a common currency if they don't share the fiscal policies, too.

If the euro survives, my desire for the Czech Republic to join the eurozone has substantially weakened, anyway. We also have our "PASOK" jerks - especially the social democratic party which may even win the 2010 elections, despite their being piles of s*it. But even with these bastards, the situation is nowhere close to Greece and it shouldn't be close in any foreseeable future. There is a trade surplus; both exports and imports are above $140 billion. The budget deficit was small before the downturn and reached something like 5% in the downturn. And the overall public debt is 30% instead of 113% of the GDP.

A shared currency allows the less responsible nations to get rid of some responsibility for their own really bad fiscal policies, which is why it makes the whole system less efficient. Before the downturn, the common currency faced no real tests. The post-downturn problems with Greece and perhaps others may be the first real test. And I am not sure that the euro will pass it.