The 2010s have begun. While 40% of the native English speakers call it the "twenty tens", 60% use the term "two thousand and tens". A natural short version of the name is "the teens". The options sound better than the "noughties" or "twenty zeros" that have ended.

A self-described physicist has calculated the decade that is just getting started. She obtained a different result ;-) and she just twitted:

The lesson is: never allow your brain to sleep for 10 years because it decomposes before you manage to wake up.

What can you expect in the 2010s?
Of course, some of the predictions should be supplemented with "unless socialism or environmentalism or terrorism or something else destroys the U.S. economy, the world economy, or something broader".

One half of those nearly 1 million of unique visitors to this blog in 2009 according to their location: click to zoom in. If you need to sleep near one of the red dots, find the TRF visitor and kindly ask him or her to accommodate you for a while. As you can see, the whole world is open for the TRF readers. ;-) 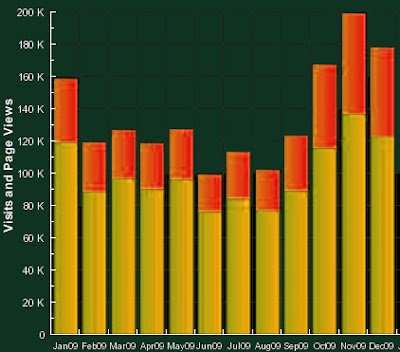