The U.K. Times have found out that Rajendra Pachauri was directly lying when he claimed that he had only known about the wrongness of the Himalayan statement for a few days. In fact, he had known the truth for months - and I would guess that almost certainly for years.

By the way, the IPCC boss uses a car with a driver to drive to his office (1 mile).

Greenpeace used a specific scientific method to estimate the melting of the glaciers. The scientists above figured out that the ice was melting beneath their feet. Picture: Spencer Tunick

Meanwhile, The Telegraph found out that the statement about the Himalayan glaciers was actually one of the more scientifically supported IPCC claims.

Corresponding statements about the ice in Andes, Alps, and Africa were based on an impression of a mountaineer (Mark Bowen, who is still grateful to Gavin Schmidt for having promoted his $0.25 book, Thin Ice, on RealClimate.ORG) who gave an interview to a climbers' magazine in a pub ;-) (Climbing 2002), and on a dissertation (full!) written by a Swiss geography student at the University of Bern working on his or her Master degree (or equivalent). :-)

Warning: the following part of the text contains snippets of text written by the boss of the U.N. climate panel which means that readers below 15 or 18 years should go elsewhere. 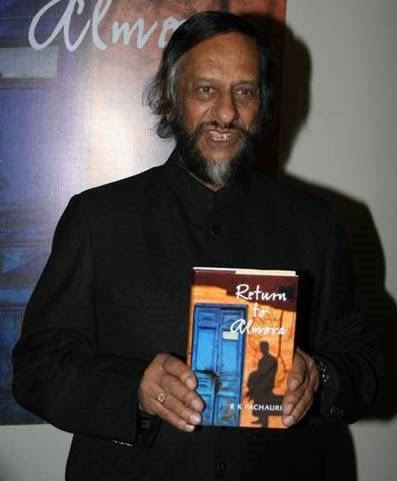 Finally, Rajendra Pachauri has already managed to find a new job and it is very appropriate for him. No, he won't return to the railways: he will Return to Almora. At least, that's the title of his first smutty novel about a climate scientist in the 1960s who is disturbed by the climate change in the mountains but who primarily "enjoys sex - a lot of sex - with a lot of women."


“He enjoyed the sensation of gently pushing Susan’s shoulders back a few inches, an action that served to lift her breasts even higher,” writes Dr Pachauri. “He was excited by the sight of her heaving breasts, as she breathed in and out deeply.”


As you can see, Rajendra Pachauri is the hottest candidate for his second Nobel prize, the 2010 Nobel prize for literature: the book is the #8 bestseller in fiction, too. Besides lots of sex, faithful IPCC readers may also find Kama Sutra and reincarnation in the book.


By the way, it is not clear from the excerpts whether Susan, one of Pachauri's numerous breasty partners in the novel, is called Susan Solomon - who just discovered that changes of the H2O concentration in the atmosphere are important for the climate. Congratulations, Susan. Sorry if I haven't fully described the shape and size of Susan's breasts from the novel. Here's a full wording:


“While teaching meditation to women in the US, Sanjay can once more barely contain his ardour. Again, breasts – usually heaving or else voluptuous – are thrust to the fore.”


Well, Susan is almost certainly a U.S. citizen but it could still have been a member of a different working group, of course. You know, peer review is a complicated process and many men and women are involved.

Pachauri also plans to become a sex symbol with the blind women because they have almost all the skills needed for them to reach the scientific consensus that Pachauri is an irresistibly attractive sex bomb: the only extra task that Pachauri will have to solve will be to hide the decline but let's hope that he will find a trick to do so and Sanjay's shaft will once again look like a hockey stick, confirming that their science is very robust. I think it's fair to say that this book proves that Pachauri is not only a liar but a f***ing liar. ;-)

See The Telegraph, The India Times, CA, and WUWT. Read a positive review of the book.

Collapse of the AGW movement

Philip Stott wrote a nice article about the speed, depth, and consequences of the ongoing collapse of the AGW fear mongering movement. While I am not 100% certain that this stuff is over, the dynamics really looks dramatic and we should think what it will mean if the evolution continues in the same direction as in the most recent 2 months, celebrate the good consequences, and be ready to counteract some inevitable negative consequences, too (e.g. for the trustworthiness of all of science in the decades to come).

The #1 leading Irish champion of AGW alarm has admitted that this war seems to be lost for the panic movement. Meanwhile, some hardcore AGW warriors whose career fully depends on the hysteria, such as Ed Miliband, are playing the role of the most faithful Germans during the 1945 Battle of Berlin. He not only refuses to revert his life but he wants to fight against the dangerous "deniers" until the last droplet of his blood. Don't be ludicrous, Ed.

Al Gore and the shape of the CO2 molecule

If you don't happen to follow Armenian climate blogs, you should still look at the pictures collected by Sahak Petrosyan. On page 46 of his new book, Our Choice, he drew a molecule of water (which is triangular) but claimed it is the carbon dioxide (which should be linear).

It's now plausible that the El Nino conditions will be gone before the Spring 2010 begins: the anomaly may decrease below +0.5 °C. However, the 3-month averages are very likely to be above this threshold at least until February-March-April 2010.

At any rate, the suddenly weakening El Nino also makes it less likely that the year 2010 will become the new warm record breaker - something that should happen almost every year if global warming were real and significant but something that the warmist cult has been expecting for 12 years.
Luboš Motl v 8:43 AM
Share