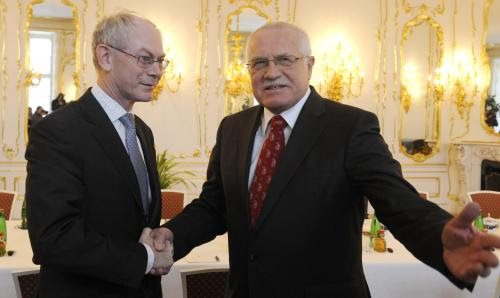 Herman Van Rompuy, an EU politician nicknamed Rambo (because he's a gray bureaucratic wolf), met Czech President Václav Klaus: click the picture for the news. Mr Klaus had to solve an interesting homework problem, namely how he should efficiently call Mr Van Rompuy. Someone sent him a text message, asking what the solution was, but the solution remains unknown to the public.

Some people use a catchy title, the "EU president", for the job held by Mr Van Rompuy. Obviously, Klaus couldn't have used the term "Mr President", although it would surely sound funny, because it would create the confusion about the basic political fact that there is only one state president in the Czech Republic, namely Mr Klaus himself.

It seems that Klaus may have cleverly picked two solutions. When talking to Mr Van Rompuy directly, he has used a low-volume name that was unintelligible via the microphones. The other part of the solution, i.e. how to refer to Mr Van Rompuy in discussions with the media, was easier for Mr Klaus, who described his meeting with "this high representative of the European Union" as one that followed the usual diplomatic standards associated with previous high-ranking representatives of the European Union.

After the exam at the Prague Castle, Van Rompuy apparently received an "F" from European politics 101 and climatology 101. ;-)
Luboš Motl v 4:49 PM
Share