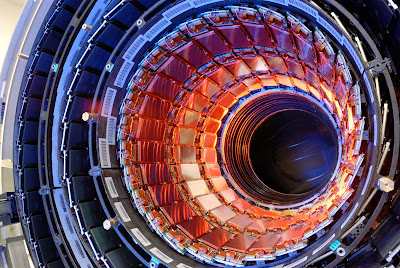 John Conway informs about a fresh decision concerning the plans for the Large Hadron Collider, and it is the following:


In 2010, the LHC will be pumped up pretty quickly to twice 3.5 TeV i.e. 7 TeV center-of-mass energy. It will work to accumulate one inverse femtobarn of collisions and stop, but not later than at the end of 2011.

The magnets have been trained for the 7 TeV total energy, so things should be smooth. Plans to adjust the collider to 10 TeV were rejected because this hasn't been tested yet and because of fears that an accident similar to September 19th, 2008 quench could return CERN to the Middle Ages.

Note that 7 TeV is a whopping 3.5 times higher than the current total energy at the Tevatron, i.e. it gives us a huge potential for new discoveries that could only take weeks if Nature happens to co-operate. These would surely be the most exciting weeks in experimental particle physics during the last 35 years.


I do think that the energy increase is more important than the lower luminosity (Tevatron will exceed 10/fb at 1.96 TeV total this year), so unless the Tevatron is lucky that an important process is rare enough so that it requires more than 8/fb or so [now] but less than 10/fb, but the 3.5 times lower energy is enough, it will become uncompetitive. I feel that 1/fb is enough for most "naturally accessible" processes at a given energy so the U.S. luminosity edge is not too important.

If they don't collect 1/fb of collisions (approximately ten trillion events, at these energies) by the end of 2011, they will have to stop, anyway. The interruption will last for 18 months or so: it will cover the whole year 2012 and it will be used to train the gadget for the doubled (maximum) center-of-mass energy of 14 TeV.

One advantage is that the end of the world predicted for December 2012 won't be blamed on particle physics: note that the Kyoto protocol expires on the same week, so prepare your gun for mutated hybrids of Nostradamus and the AGW cult (be sure that both cults will survive until 2012 although the relative sizes are to be seen). :-)
Luboš Motl v 9:06 PM
Share