Massachusetts grabbed by the elephant 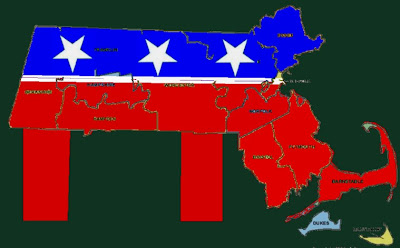 Click to zoom in. I spent some time by drawing it. ;-) The actual map of the results looks even more like an elephant, with a blue eye (in Boston).

So is it a donkey or an elephant? While it doesn't look fat enough for a proper elephant, this Cape Cod piece surely does look like a proboscis, doesn't it? The voters are solving a homework problem whose answer used to be clear but it is fortunately no longer quite clear.

Coakley is an immoral female careerist who has been preparing her Senate campaign and Ted Kennedy's death long before he died. Her thugs will beat you if you ask a question.

She thinks that the Catholics shouldn't work in emergency rooms. Her main argument against her competitor is a hateful attack ad of the Goebbelsian style. She even accuses Brown of not being a far-left fanatic. ;-) To gain power, she's ready to support arbitrarily radical left-wing policies. But I think she is not a true believer: she's abusing the distorted political traditions of the Bay State to achieve personal gain.

When he was asked how he would be feeling in Ted Kennedy's seat, he wisely replied that with all respect, it's not Kennedy's or Democrats' seat: it's a seat of the people of Massachusetts.

If he manages to win - and his chances are, according to the recent polls, significant - the Democrat Party will lose its magic number 60 in the Senate that allows it to advance somewhat sick policies such as the socialist healthcare in marginally non-democratic ways. They already consider the nuclear option.
Luboš Motl v 10:31 PM
Share