Their aim is to find out how the average temperature variations on the Northern Hemisphere influence the concentration of carbon dioxide in the atmosphere. They find out - or at least argue - that this influence is five times smaller than previously believed.

But let's begin at the start. The relevant formula is


Here, γ (gamma) is the coefficient they want to know. Note that outgassing and various reactions of the biosphere make γ nonzero. As you may remember from the discussions about the 800-year lag in Al Gore's movie, the ice cores in Antarctica show that a 8 °C increase of the temperature adds something like 100 ppmv [parts per million of volume] of CO2 into the atmosphere (the difference between ice ages and interglacials), so it looks like 12.5 ppmv per °C. However, this estimated value of γ is relevant at time scales that are much longer than a century.

Unrelated: Willie S. recommended me an interesting article about thorium reactors that would increase our reserves from 80 years of uranium to 8,000 years of thorium (estimates) - and they look relatively realistic.


The present authors also look at three Antarctic ice cores but they want to know the value of γ relevant for the time scale of several decades or one century. So they statistically investigate the ice core data from the period between 1050 AD and 1800 AD. At least in those times, the anthropogenic greenhouse effect was negligible, so the only systematic correlation between CO2 and temperature could have been caused by the influence of temperature on CO2, not the other way around. The transition between the Medieval Warm Period and the Little Ice Age - conveniently located at 1550 AD in this piece of work - plays an important role in their analysis.

The result of their treatment is that γ we want to know is between 1.7 and 21.4 ppmv of CO2 per Celsius degree (4/5 of their estimates sit in this interval), with the median value around 7.7 ppmv. That's less than 20% of the recently promoted value of 40 ppmv per °C. This recently popular, large figure of 40 ppmv per °C (or greater) is excluded by the new paper at the 95 percent confidence level.

Frank et al. explain that the uncertainty about the strength of this "carbon cycle feedback" constitutes approximately 40% of the uncertainty about the whole projected 21st century global warming. Because they have slashed more than 80% of this contribution which used to represent 40% of the total future warming, you may see that one third of the projected 21st century warming has to be deleted, too.

(There is some uncertainty about the numerical value of what they consider the "total uncertainty of the projected warming, so take the previous paragraph with a grain of salt.)

So if you decided to believe the remaining analyses of the feedbacks, a typical 3 °C warming per century would drop to 2 °C. Frank et al. therefore save about 50 trillion U.S. dollars needed for the cooling by 1 °C. Of course, they shouldn't be thanked and paid - Nature should, and I don't mean the journal. :-)

(An Alister Doyle of Reuters summarized the paper by the title expecting "global warming to trigger more warming". It's amazing how people employed as journalists can choose titles that say exactly the opposite than the main message of the new paper.)

And that's just the effect of one particular kind of feedback. Other mechanisms and relationships surely have to be re-analyzed in the post-ClimateGate era, too.

More critical analyses of other feedbacks - especially those related to water vapor and clouds - are likely to remove another third of the recently promoted values of the projected 21st century warming which will probably return this predicted quantity close to or below 1 °C again, in agreement with many other sensible and impartial ways to estimate the warming per century. 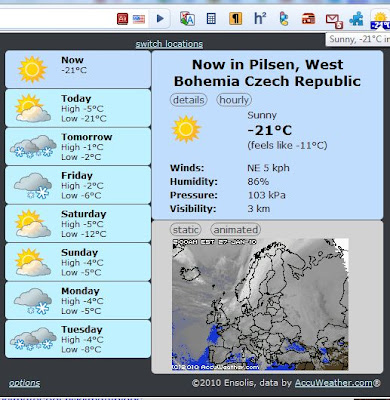 It was pretty cold in the Czech Republic yesterday. Minus 21 centigrade in Pilsen, minus 30 centigrade in Šindelová near Sokolov, in a location of a math camp where I was as a kid. ;-)
Luboš Motl v 7:00 PM
Share