Rajendra is a genus of moth in the family Arctiidae, described by Moore in 1879. It thinks that it prefers to live in the Arctic conditions so it wants to cool the environment by 20 degrees or so. In order to expand its habitats, it's also preferentially eating coats so that the victims feel like in the Arctic zone, too. Rajendra is frequently flying. 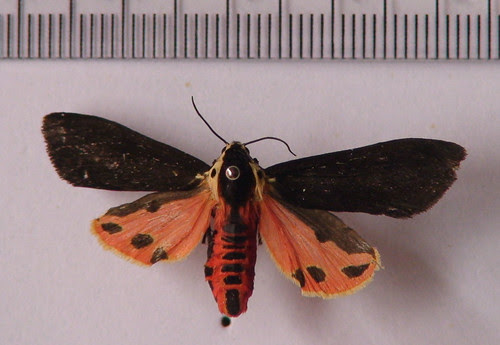 Rajendra perrotteti, a member of the genus

As the encyclopedias explain, the most distinctive feature of the whole family is a tymbal organ on the metathorax. It's a vibrating membrane that the male Rajendras use to create a lot of noise similar to the cicadas.

Most of us have heard a lot of this noise recently.


Everyone knows that moths eat clothes. It can happen to everyone and anyone. For example, you may be the emperor of the United Nations. On a freezing morning, you may find out that your new clothes have been eaten.

Richard North is urging the U.N. to buy the moth trap in order to increase the chances of their own survival.

If that is the case, you have two options. You may convince your vassals to tell you that you still have nice new clothes, even after they have been eaten. Alternatively, you may buy the Safer Brand 7270 Clothes Moth Alert Trap for a few bucks. Advantages:

► Protects clothing and furniture from costly moth damage
► Designed to alert you to moth problems
► Traps can last up to 12 weeks
► Contains a patented pheromone lure
► Traps adult moths, not larvae.

The last advantage makes this product very human: Rajendra's off-spring will be OK.

Well, you can be sure of one thing: difficult insect won't commit seppuku. In the video above, he has the arrogance to boast that he was elected just like the German Führer - by acclamation. In fact, by acclamation by "all the countries in the world". It's pretty clear that he must be liquidated in the same pro-active way, too.

The National Center for Public Policy Research demands that the IPCC returns its 1/2 of the Nobel prize, dismisses the current leadership, adopts and enforces a strict conflict-of-interest policy, and makes all data and communications transparent to the public from now on.
Luboš Motl v 8:47 AM
Share