In 2000, East Anglia's CRU determined - for hundreds of millions of pounds of taxpayers' money - that snowfalls are now just a thing of the past. Children wouldn't see snow again.

Meanwhile, in the real world, snowing just returned to Pilsen (not to speak about a large part of the Northern Hemisphere); the temperatures have remained below the freezing point for many days. Up to 60 centimeters - two feet - of snow is forecast in the Czech Republic until Monday while frozen iguanas fall from trees in Florida.

How much water is 60 centimeters of snow? Of course, if the snow melts, the water occupies a smaller volume. 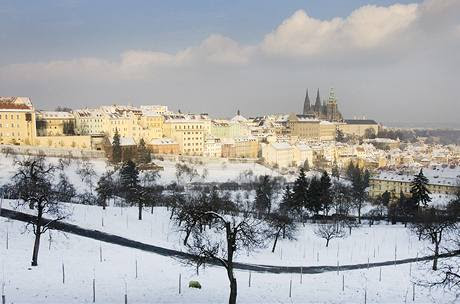 Well, each column of H2O is expanded by the same factor. So the depth of snow is equal to N times the equivalent amount of liquid precipitation. How much is N? It depends on the temperature:
Minus fourty degrees is a nice place to stop because it's exactly the same temperature in Celsius and Fahrenheit degrees. ;-) You see that N=100 at the coldest temperatures is impressive: a very fine snow, indeed. Finland with its -37 °C should be able to see this amazing coefficient in reality.


My understanding is that the compression factor doesn't depend on the total depth much. The snow may tend to compress under its own weight but the weight is negligible.

For example, the average temperature for those 60 cm snow may be around -5 °C which gives N=15. The water equivalent is therefore 4 cm - about twice the January precipitation average in Prague, close to 2.4 cm (but less than the monthly precipitation in May, the rainiest month with 7.7 cm a month).

If the equivalent water height is 4 cm, one squared decimeter - something like one half of a footprint - equals 0.4 liters (a liter is a cubed decimeter) which is almost exactly 0.4 kilograms. Two footprints would therefore carry 1.6 kilograms or so - and you know that if your shoes have this weight, they won't make a terribly deep hole into the snow, even at N=15. So the snow's own weight probably doesn't matter too much.
Luboš Motl v 1:05 PM
Share