A subtle sentence on extinctions 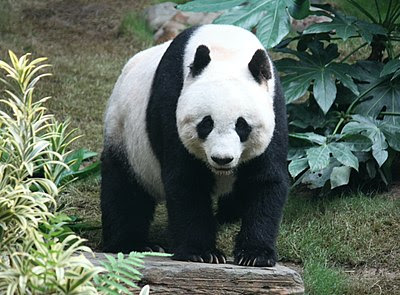 Many reports suggest that there may be 2,000-3,000 members of the giant panda clan in the wild which would mean that they should be classified as "vulnerable" rather than "endangered" (which is more serious). But there clearly exist pressures to keep these nice symbols of biodiversity "endangered".


Andrew Revkin wrote a couple of words about the IPCC Himalayan glacial scandal. But there's another interesting story in his text - one about a prediction of extinctions. If you open the Fourth IPCC Synthesis Report (PDF) on page 48 (26 of 52), you will find the following bizarre quote:


Approximately 20 to 30% of plant and animal species assessed so far are likely to be at increased risk of extinction if increases in global average temperature exceed 1.5 to 2.5°C (medium confidence).


But let's omit the disclaimer about the medium confidence and focus on the statement. Revkin points out that the sentence is ambiguous - and maybe deliberately so. The IPCC folks whom he has talked to in Copenhagen have agreed that it was bad writing. But what does the sentence mean? It looks like the rules of grammar and syntax are respected so it must mean something.

The main problem is that the sentence doesn't say how much the extinction risk is supposed to increase. So in principle, an infinitesimal increase of the risk is enough to be called an "increase". Because a continuous quantity such as the extinction risk - whatever its exact definition is - is virtually impossible to stay exactly constant in a measurably different environment, this number has to either increase or decrease. After all, the change from 9.5 x 10^{-7} to 1.1 x 10^{-6} is an increase, too.

For this reason, the original statement is exactly equivalent to the following statement:


Approximately 70 to 80% of plant and animal species assessed so far are likely to be at reduced risk of extinction if increases in global average temperature exceed 1.5 to 2.5 °C (medium confidence).


Because 70-80% is more than 20-30%, a simple comparison of the two sentences above implies that a 1.5-2.5 °C warming will improve the chances of most species to escape extinction and survive. In other words, the very moderate warming would be good for most of them.

After all, this is quite certainly the case. The optimum temperature for most existing species is higher than the current global mean temperature around 15 °C (just look at the thermostat in your living room), so a little bit of warming would be good for us and for them.

But the original sentence was deliberately formulated in such a way that the readers would be tempted to simplify it and "identify" the moderate warming with the word "extinction" - even though the actual content of the sentence is exactly the opposite one. The word "extinction" is such a powerful weapon of irrationality that it's enough to pronounce this word in the context of something else, and the something else will be immediately identified with negative emotions.

The IPCC propagandists are well aware of this fact about the human reactions and psychology, and they abuse it as often as they can (and sometimes even if they can't).

An alternative interpretation of the "increased risk" is that a species must actually jump into a higher category of endangerment, according to some conventional ad hoc separation of endangerments into "qualitative" groups. If that's the case, I wouldn't be able to derive the sentence about the "70-80%" of the species that will celebrate the warming.

However, it that's the right interpretation, a balanced report would need to write the other side of the coin - the percentage of species whose risk of extinction would decrease (it wouldn't be simply 100% minus the previous number). And I am pretty sure that such a calculation would still show that the situation of a higher number of species would "qualitatively" improve than the percentage of species whose situation would "qualitatively" deteriorate.

They don't say what the other number is - because "saying nothing is not a lie" - but they clearly want the readers to interpret the silence in such a way that the number of species that would like the moderate warming is zero (which is clearly nonsense).

Whatever the right interpretation of the "increase" is, the formulation is either deliberately hiding that the hypothetical warming would be good, by linking the words "warming" and "extinction", or it is deliberately showing only the numbers from "one side of the aisle". Whatever the "increased risk" exactly means, the report simply can't be an objective way of doing science.

Note that we haven't analyzed a "random" sentence about the extinctions. I have discussed - and you will discuss - the most important IPCC sentence related both to extinctions and climate change.

Off-topic: I was in Prague yesterday. Besides inspecting all the buildings (and a few people) of my Alma Mater, the Faculty of Maths and Physics of the Charles University ;-), I have been to the Old Town Square which organized a concert for Haiti.

Only about 200 people were present in the audience - and sending $1.70 text messages as donations - which puts your humble correspondent among the top heroes of musical charity in his nation. I am actually amazed how they could collect thousands of dollars through the service. It had to come from the listeners of the radio or elsewhere, too.

The number of musicians was comparable to the number of people who were listening. That shouldn't be shocking at minus 8 degrees Celsius. However, the musicians did very well. And there were even dancers whose performance was stellar, and kind of resembled strip-tease. Not bad at -8 °C. ;-)

The individual Czechs (1/700 of the world population) have collected $2 million for Haiti while the government gave slightly above $1 million. If you multiply $3 million by 700, you get $2 billion which could actually be a substantial fraction of the costs to reconstruct those half a million of collapse buildings etc.
Luboš Motl v 11:23 AM
Share