These are kind of interesting numbers. 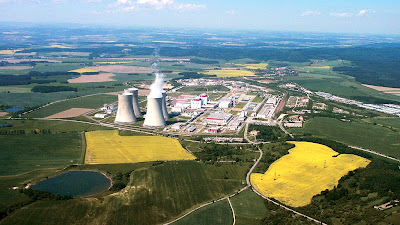 All the numbers below will be averages over daily cycles and seasons: the total annual production or consumption is obtained by multiplying the figures below by 24*365 hours.

In 2009, Czechia produced about 9.4 GW of electricity in average (and consumed 7 GW: the rest is exported which makes our country an energy exporter). 75% of the production was made by ČEZ, the dominant electric utility: their production is almost exactly equal to the country's consumption, 7 GW. And 44% of them i.e. 33% of the total Czech production figure (3.1 GW) was produced by the two nuclear power plants (JE: JETE, JEDU).

In 2009, JE Dukovany had the 3rd best year ever, producing 1.6 GW in average. JE Temelín had its most productive year, surpassing 1.5 GW for the first time. That means that in average, each of the two 1 GW blocks was running 75% of the time.

It's being planned that three or five new blocks will be built in Temelín - that would add something like additional 1.5 GW or 3 GW and the nukes could slowly reach 50% of the energy demands in the country. The candidates for the tender are Westinghouse (U.S.), Atomstroiexport (Russia), and Areva (France).


The total cost of the five blocks is estimated at CZK 500 billion; USD 1 = CZK 18. By dividing 500 billion by 3 million kilowatts, you see that 1 kW running for the whole lifetime of the plant costs CZK 150,000 or so. If you divide the last number by the price of electricity, CZK 5 per kWh, you will get 30,000 hours which is about 4 years. If the whole revenue were profit, the investment would be back in 4 years. You see that the profit should exceed 10% of the revenues (salaries, fuel etc. gets subtracted) for the initial investment to be profitable - not bad.

The total production figure for the country, 9.4 GW, means that each citizen can consume almost 1 kW in average if you divide the production among the citizens including newborns. Clearly, most of this figure isn't consumed in the households: out of those 1000 W, the average citizen may burn around 50 W in average at home (this figure is the only guess in this article!). A relatively small but visible portion of those 50 W are light bulbs: try to realize the negligible effect of the light bulbs on the overall consumption.

Most of the energy is being spent in electric motors (streetcars etc.) whose efficiency is pretty much fixed and in heavy industrial applications. The losses during the transmission are relatively small and it's hard to reduce them, too. What I want to say is that the "bulk" of the energy really can't be saved because it produces real things out of the energy that must be real, too.

By the way, today, some villages including Chanovice in Šumava - the Bohemian Forest (mountains near the West German and Austrian border) - rejected the permanent storage of the burned fuel near their homes. I understand them: I wouldn't think that Šumava is necessarily the best place, either. They're beautiful hills and forests. On the other hand, I am sure that there are appropriate places and the citizens around can be paid enough to agree. Still, it may be more sensible to store all this stuff in Siberia or other regions with a low population density.
Luboš Motl v 12:14 PM
Share