The IPCC was mostly created in Great Britain. The Great Global Warming Swindle argued that Margaret Thatcher gave birth to the monster because she wanted to prove that the coal sucked (and nuclear energy was a way to go) which would have given her a powerful tool to beat the obnoxious striking miners' labor unions.

But seven weeks ago, her ex-adviser Lord Monckton told me in Berlin that it wasn't quite the real story - and this story didn't work chronologically. ;-) Nevertheless, the general British roots behind the IPCC are undeniable (Met Office etc.). 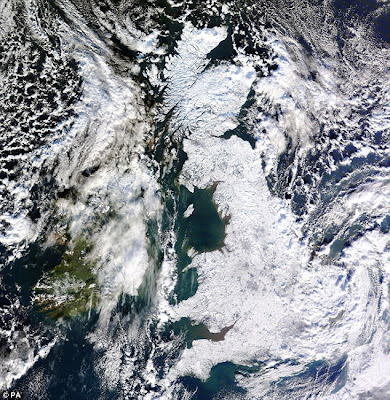 We're living in an intense period of the climate debate that is filled with ClimateGate, GlacierGate, PachauriGate, AmazonGate, DisasterGate, and numerous other gates.

And it's fair to say that these sociological earthquakes have their epicenter in Great Britain once again. Think about the University of East Anglia, links of Pachauri's fraudulent companies to Britain, and the amazing excess of the British newspapers that have already abandoned - partially or completely - the "total climate alarmism" as we have known it in the mainstream media for many years. And let's not forget about the cool recent NASA/MODIS ice-age picture of the British islands. ;-)

Britain is simply ahead of the world - and India, perhaps because of its status of the most important former British colony and because of Pachauri's citizenship (and the location of the Himalayas), seems to be the only country that may compare with the speed of the developments in Great Britain.

That's true at the level of the science czars, too. Prof John Beddington (*1946), the Chief Scientific Adviser to the otherwise hysterically alarmist UK government (a job previously belonging to a Mr David King), has said that the climate is complex. The uncertainties and the cases when skeptics have been proved correct must be admitted. Openness and transparency has to be required.

See the U.K. Times for the full story.

Beddington has also said many things that prove that the "climate action" is still a religious dogma for him that is not open to any debate and that shouldn't be influenced by any of the "details" of science. The certainty that the "fight against climate change" is the right policy has to be kept above 90%, he emphasized, which effectively means 100%. Amen. So if you judge him from our standards, i.e. from a viewpoint of a rationally thinking human being, he is a dishonest loon, too.

But he is still ahead of many others - much like Gorbachev used to be ahead of other communist leaders in the 1980s - and I think that we will have to wait for a little while before e.g. the U.S. science czar - which may already be someone else than John Holdren - will get at least as far in the climate perestroika as Mr Beddington did today.

Andrew Weaver, a Canadian IPCC contributor, argued that the IPCC has already probably crossed the line of political advocacy, ceasing to be an impartial scientific advisory body.

It also began to eat the scholarly resources that could be used for a more meaningful scientific research of the climate rather than stylistic exercise written before artificial "five-year" deadlines. (Guess who loves artificial five-year deadlines among would-be theoretical physicists.)

Suddenly, so much "courage" from people who have co-existed with the system for years and allowed it to thrive...

A debate in Merimbula, New South Wales, about the science of climate change was dominated by the skeptics. And as far as the coherence, rationality, and overall quality of the arguments of both debaters went, those of Mr High were high while those of Mr Nott were not. ;-)

Times of India interviewed a TERI fellow - an employee of director Rajendra Pachauri.

When asked whether Pachauri would or should resign, the employee was chosen as the most impartial expert to answer this question about his boss. The employee said that the IPCC chief had nothing to do with the 2007 IPCC report - he is not the author of the report, just collected the Nobel prize for it - so he had no reason to resign. ;-) Some of the green lunatics' statements sound like well-crafted jokes, indeed.

I wonder what is their estimate for the number of people in the world who would buy something along these lines. I suspect that they must believe that the number equals many billions - they judge the intelligence of the people according to their own. IQ of a pumpkin. (This actually rhymes well in Czech: "IQ tykve" [í-kvé ty-kvé].)

Ms Jacqueline Cramer, the Dutch environment minister, said that the GlacierGate was "extremely worrisome" and has "hurt her trust in the IPCC".
Luboš Motl v 11:38 PM
Share