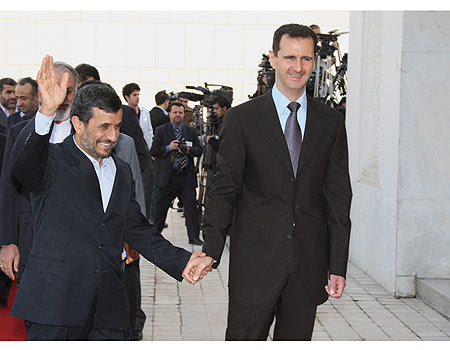 Mahmoud Ahmadinejad together with one of his tutors, Syrian president Bashar Assad. Assad promised the boy a cup of ice cream and Mahmoud has indeed said that they're friends.

Zionist regime will be annihilated if it repeats past mistakes.


I don't know where he exactly wants to "uproot them" - or how he obtains enough antimatter to "annihilate them". But from the 13 million Jews in the world, almost 6 million live in Israel. To "uproot them" therefore means to repeat the Holocaust, including the numbers.

While Ahmadinejad is a ludicrous chimp and a big mouth, he is still the official president of Iran. I am not quite certain whether the Iranian people realize that this is why such pronouncements matter: even if he doesn't look serious, he simply has powers that are dangerous. How do they expect other people in the world - and Israelis in particular - to react to such propositions?

Israel is just defending its right to live which may have been controversial 60 years ago but it's surely not controversial today. Its existence has been a vital law that has governed the Middle East for decades. And Israel has been a bright spot of the Middle East, a proof that even such region may achieve a lot. Everyone is making mistakes - and Iran is surely making many more of them than Israel - but most mistakes simply cannot justify the plans to "uproot him".

Not everyone shares my opinion that Iran's military target should be bombed in the near future. But I think that sane people in Iran should be able to understand that this rhetoric from their president will surely intensify the sentiment among the important politicians and generals that the pre-emptive strikes against Iran should begin soon.

There is a question whether such destructive pronouncements should be associated with the president only, or with the whole nation of Iran. It's a subtle question. But I think it's clear that most people in Iran don't object to their president's plans; many of them may even feel proud.

Good for them but in that case, they shouldn't be surprised if their house happens to collapse together with a nearby military facility. Difficult military operations can rarely be performed completely safely. And they're unfortunately a part of the problem. They're a part of the threat for millions of people who were born in Israel and who have peacefully lived there for years. To say the least, they help to threaten their basic safety and the threat for the decent citizens of a Middle East country is a result of the arrogance and religious bigotry of the Iranian and other politicians.

A Kuwaiti daily wrote that Ahmadinejad plans to instruct the bosses of both Hamas and Hesbollah to attack Israel from both sides within two weeks, assuming that it will mean that there will be no sanctions against Iran (a strange implication, isn't it?). In Czech, "Nasrallah" means a feminime form of "pissed-off", or more literally, "being shi**ed upon".
Luboš Motl v 12:02 PM
Share